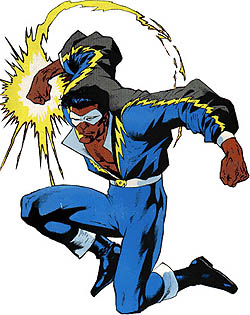 With the new show coming up, I thought this would be a good time to go over Black Lightning’s history. Personally, I’m really looking forward to this addition to the CW hero shows, even though Black Lightning won’t be part of their universe (then again, Supergirl didn’t start off that way, either). Like any character that’s been around for a few decades, his history has been rewritten a few times, and his costumes changed. I’m going to go with his original history, and try and stick by that. From what I’ve seen from the trailers for the show, they’ve made changes again.

Jefferson Pierce was an amazing athlete who got out of his dangerous neighborhood through sports, even making it to the Olympics. Feeling like he needed to give back to his community, Pierce fashioned a heroic identity and became a street-level hero, calling himself Black Lightning, as well as teaching high school. Originally, he had no powers of his own, using a special belt in his costume to create a force field or hurl bolts of electricity. Later, he was rewritten to being a metahuman.

Black Lighting operated in Suicide Slum, the worst part of Metropolis. Social crusader Green Arrow nominated him for membership in the Justice League, which he turned down, preferring to focus on his neighborhood rather than fight supervillains and aliens. His title didn’t quite last a year, and he made occasional guest appearances until the 1980’s. Batman, in yet another disagreement with the Justice League, quit the team and founded his own. Black Lightning was a founding member of the Outsiders, and was on several versions of the team over the years before eventually joining the Justice League in a later incarnation. Under the administration of President Lex Luthor, Pierce became Secretary of Education.

He had a troubled relationship with his wife, Lynn, and they separated at various times. During the times they were together, he fathered two daughters: Anissa, whose density powers led her to take the name Thunder when she joined a later Outsiders, and Jennifer, who had electrical powers and joined the Justice Society of America as Lightning.

Black Lightning’s major power is generating powerful bolts of electricity. He can also create force fields, and has variously been able to fly, hover, or make long leaps via electro-magneticially pushing off objects, depending on who is writing him. He’s a highly skilled fighter, from his own experience and then training with Batman, among other top-level hand to hand combatants. Contrary to some misconceptions, he is NOT Static’s father.

I can’t wait for this show…