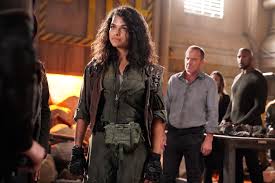 Things are not looking great for the captured Agents of SHIELD in “A Life Spent.” Kasius is getting his visitors, Simmons is still captive and temporarily deaf, and the shattered Earth is still floating outside the window. Kasius gets a snub from visiting VIP Lady Basha, which sends him off in a temper tantrum. He then threatens Simmons for some help with a problem.

Back at Grill’s shop, Coulson, Yoyo, and Mac are working off their debt and finding themselves in working conditions that even Ebenezer Scrooge would say, “That’s not right.” Zev, Grill’s thug, seems especially fond of the shock feature of their metrics. Mac is going to go after Grill, but finds out the limitations imposed by the security systems.

Daisy and Deke are looking for the others, while Deke proves he’s smarter than he looks. After babbling about multiverse theory, Deke figures out there’s a Renewal going on. After Daisy pushes him, he also comes up with Grill’s as a place where the team might be hiding. As this goes on, Yoyo tells Mac not to do anything stupid for her, and they manage to wrangle their way onto a salvage run on Tess’ trawler.

As the others figure out what to do next, Simmons gets brought to a young woman freaking out about something. Abby, the young woman, turns out to be an Inhuman whose powers are triggering seizures. Abby is very worried about an upcoming ceremony of some kind. Knowing this place so far, it can’t be anything good.

Daisy finally finds the others and gets brought up to speed (no pun intended for once) by Yoyo, who, in turn, gets yelled at again by Grill. He’s really not a kind employer, that one. Grill thinks Coulson and his friends are taking over whatever racket Virgil was running. The man has serious trust issues. Coulson figures out Virgil was looking for something, and the piece of Earth designated 616 is where he was looking. In the Marvel Multiverse, the “main” Earth with all the heroes we know on it is # 616, so nice little nod there. Tess isn’t happy about the idea of a side trip, and it gets worse when they find out Zev is coming along to babysit them.

Simmons calms Abby and gets her to demonstrate her powers. Essentially, she can density shift like the Avengers’ Vision, which can be a really dangerous power set. Simmons tries to talk Abby through ways to focus and use her powers, and we keep hearing about nasty punishments if she’s not ready for this ceremony.

I get that May is an ace pilot and all, but I’m not sure why she’s piloting the trawler when Tess has so much more experience and it’s kinda her ship. Even May needs time to learn. She and Coulson debate what to do and why they’re there. May has a very legitimate complaint about how their crises are running together.

There’s a great scene of Grill’s monitors not being able to handle Yoyo’s powers. It’s fun watching him glare at his machines, and it’s a nice set up for the next part of her plan. What follows is some nice teamwork with Yoyo and Daisy, and the first time we’ve seen Yoyo’s powers portrayed like most other speedsters.

While Mac distracts Zev, the others try and figure out what Virgil was looking for before he was eaten. Between them, Coulson and Tess manage to find a hidden clue that gives them a more specific place to look. Zev thinks they’re pulling some kind of con, and starts interfering with what they were doing. Despite his best efforts, some team work manages to beat him, although Mac makes a very unfavorable comparison, and gets a great comeback from Coulson.

Simmons works with Abby to get a handle on her powers, while Kasius makes veiled threats and conspires with Sinara, the woman with the flying spheres. As all that goes on, Daisy is trying to use her pilfered toy to find something they need when she runs into Deke again. Man, that guy’s everywhere. Daisy and Deke bicker for a bit. He does actually have some legitimate concerns. He provokes her into using her powers and then mocks her more about her past. He really needs to get slapped. A lot.

Tess shows how dark the outlook tends to be in the future. It sort of makes sense with their resources being so limited and subject to the whim of Kasius and the Kree, who aren’t noted for their generosity. Coulson refuses to compromise his principles. SHIELD will kill in combat, but not in cold blood. Then everyone gets a surprise when they receive a new signal.

Lady Basha turns up and offers Kasius several more slights. While he’s lord of his little world, he’s apparently not well thought of other places. She has her champion face off against Abby. The little Inhuman isn’t doing well. In fact, she’s pretty much getting her ass kicked, and forgetting everything Simmons tried to teach her. Kasius is throwing not-amused looks at Simmons. While Daisy plays hide and seek in some kind of hydroponics area with more Kree, Abby finally pulls herself together and pulls off an impressive trick.

Zev rages from the hold, and May snarks that she can’t find a way to mute him. Tess fusses that someone was going to die as soon as they started lying about the mission. Coulson records what they’ve heard so far, and Tess pushes again that they need to kill Zev. Mac refuses to even consider it. Zev has sabotaged the ship so they need to limp back to the Lighthouse.

Simmons gets a crash course in how Kasius makes his money, and is appalled, although there’s nothing she can do about it. Daisy tries to sneak into Kasius’ place to free Simmons, which really doesn’t go that well for her. Grill rages at Coulson and his crew about mutiny, and that he’s going to report them to the Kree. Yoyo has adapted to the cutthroat way this world works faster than the others, in part because of her background, and takes some definitive steps to save them. Great for SHIELD, not so good for Zev.

Daisy’s mission hits some unexpected snags from a somewhat expected source. Team Coulson makes progress on their investigation, and the result stuns Tess. The reason why it’s so surprising is demonstrated as we see Zev’s fate. It’s grim down there.

What I liked: Cut off from everything with only each other to rely on, SHIELD shows why they’re so good at what they do. Their teamwork is great. Well, except for Daisy charging off on her own, but that’s not unexpected. I liked Simmons working with Abby, drawing on her education, training, and experience with Inhumans. Kasius’ money-making scheme is ugly, but makes sense with what we know.

What I didn’t: Grill is a stereotypical abusive boss, and Zev a thug with nothing special about him. The same for Lady Basha. The only villains I’m finding interesting in this so far are Kasius and Sinara. And where’s poor Fitz?

I’ll give this a high 3.5 out of 5. I do love seeing the pieces of SHIELD fit together so well as a well-oiled machine.