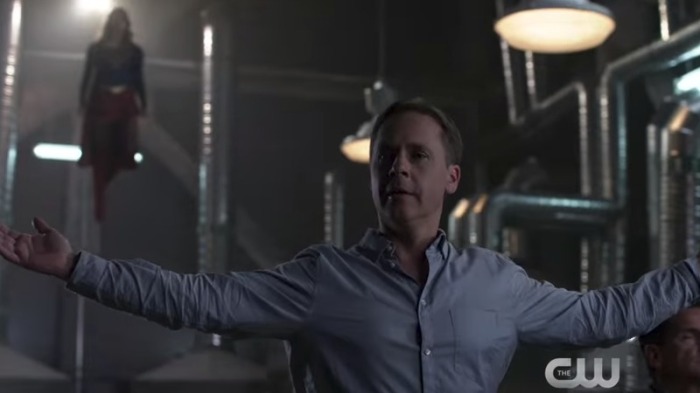 For I say unto thee that our angel Supergirl shall… she’s right behind me, isn’t she?

While the writing on Supergirl can be uneven, sometimes they pull off something really good. They did that this week with “The Faithful.” They use this episode to take a look at something you almost never see with people with superpowers, certainly not in the live action adaptations. It was an episode that can really make you think, but doesn’t club you over the head with it.

After the voiceover, which was nothing new for this season, we go back to Season 1, Episode 1, and the fateful plane mishap that started the series and got Kara Danvers to adopt the role of Supergirl. One of the passengers on that flight was changed a lot by those events, and it gets really interesting this episode.

Back in the now, which is apparently two years later, we see Samantha trying to juggle her corporate responsibilities with attending Ruby’s soccer game, and missing some important things. She gets approached by a strange woman who gives her a flyer telling her she and Ruby are special and should come to their community. Clearly, Samantha isn’t about to do what some random stranger tells her to about her daughter, but she holds on to the flier.

Lena and Kara stop by Lena’s office with some entertaining banter. I’m glad their friendship is in a better state than it was a few episodes ago. They meet up with Samantha, and that flier falls out of her bag. Kara is very disturbed by this, as the main symbol is Kryptonian. She asks to keep it, and Samantha doesn’t want it (although why she kept it to this point I’m not sure).

At CatCo, James and Winn mention going out as Guardian, but apparently the city is going through a “crime drought.” Speaking as a law enforcement professional, I can tell you that just doesn’t happen in a city of any decent size. Their alternate plan to go bowling is interrupted when they see Kara frowning at her computer, and she brings them up to speed on the flier.

The three amigos decide to go check out a meeting of these people, and it does nothing to reassure Kara at all. Everyone there has been saved by Supergirl at some point, but it’s not a support group. It is, as Winn puts it, “cult-y.” It’s when they move on to “Supergirl, our Savior,” that Kara looks fully freaked out, not that I blame her.

It’s an interesting idea. If someone with powers “far beyond those of mortal men” saves your life, and tends to show up whenever the city is in danger, why wouldn’t people treat them like a god? She responds to people in need, and does it clearly and directly, which you’d have to argue no current religion can say of their own deity. Even with Thor, who IS a god, that’s something they haven’t touched on in the movies aside from a few jokes.

After Winn digs up some information on Thomas Coville, the leader of this sect, Kara goes to a girls’ night with Lena, Maggie, Alex, and Samantha. Samantha dodges questions about Ruby’s father, and asks a question about Kara seeing anyone, which is a bit awkward. After more awkwardness over the having kids issue, Kara ducks out answering sirens, which Alex and Maggie help cover for, since Lena and Samantha are among the few who don’t know Kara’s secret.

The sirens weren’t just handy for Kara. A young man lit a fire and stayed in the building to get saved by Supergirl, because that’s how you get into the cult. Kara is shocked by this, which I fully understand. Olivia, a girl from the earlier meeting, is there, telling him he’s “one of us” now. When Maggie arrives, Kara tells her what’s going on, and Maggie comments there’s nothing she can do between freedoms of religion and speech as far as the cult goes.

After another scene highlighting the working mother problems Samantha is having, Kara goes back to the cult to try and talk to Coville. He’s a very serene man who has no questions he’s doing the right thing. He also recognizes her as Supergirl. She tries hard to talk him out of what he’s doing, but he won’t abandon his faith, no matter how screwed up it seems from the outside. You have to admire his conviction, if nothing else. We also learn that Coville isn’t just a devotee of the Girl of Steel; he apparently has some Kryptonian artefacts himself.

Lena offers Samantha some encouragement on the mother front. Mind you, Lena has a low bar set up considering her family. While this happens, Kara broods on the balcony at CatCo and James has a talk with her. He relates his own first meeting with Superman, and how such a thing can change your life. He asks Kara how she isn’t a miracle, and she really doesn’t have a good comeback for that.

Coville crosses the line from weird fringe religion to terrorist in the next segment. He has the Kryptonian device, which Winn describes as like our earlier Voyager probes, and the power supply is malfunctioning. Apparently, he’s holed up at a sold out hockey game (yep, this is filmed in Canada all right) and plans to have Supergirl save everyone, potentially recruiting thousands of new members to his cult. For whatever reason, the writers are continuing their unofficial embargo on J’Onn not doing anything in the field, merely barking orders as Hank Henshaw from the DEO. Supergirl rushes off to try and avert disaster, and finds out the probe came along with something extra: Kryptonite. When things get really bad, Hank finally suggests going into the field, only to be told by Winn he won’t get there in time. Maybe, with thousands in danger, he should have gotten going earlier?

Supergirl demonstrates her weakness, even making herself bleed, which scares off most of the cult. The Girl of Steel does her best, and with some teamwork from Alex and even Coville, manages to prevent a major disaster. Later, Coville goes to jail, as you’d expect, but remains serene in his beliefs when Kara visits. He’ll protect her secret.

Kara and Alex join Samantha for Ruby’s school performance that night, which is weird on a few fronts. First off, I missed when they all became such close friends. Secondly, the girls do a number with most of them in Supergirl outfits, driving home the cult point, even though Alex puts a good spin on it. And Ruby’s big number is “Pure Imagination” from Willy Wonka, which is also in Thor Ragnarok. I guess it’s an unofficial Marvel/DC musical crossover? Alex freaks out seeing the kids performing, and realizes how important kids are to her, leading to a sobbing breakdown because she is convinced Maggie won’t change her mind. I get that being upsetting, but maybe talk to the woman you love before you give up on the relationship?

The episode ends with various scenes of characters dealing with their spiritual lives, which is a nice touch, and we get to see that J’Onn’s father is still around. We also see Samantha have a really weird hallucination or visitation or something that freaks out both her and Ruby. And we see that when the artefact went nuts in the arena, is apparently set something in motion with the crash site we saw below the waterfront in the episode Samantha first appeared in.

What I liked: This was an episode that raised some interesting points. Coville is a hard character to sum up. He did some horrible things, but truly believed that not only was he doing the right thing, but that no one would be hurt or even in danger. You could make the argument that Kryptonian class heroes are the next best things to gods. Why shouldn’t they be worshipped? As Olsen said, and I’m paraphrasing, “Usually when you pray, no one comes. You do.” I also liked James and Winn’s unhesitating support of Kara, going with her when she was clearly troubled. It was nice to see those three together again. Lena’s reassurance to Samantha was nicely done.

What I didn’t: Why is J’Onn not doing anything this season? Did they blow their CGI budget? Did the actor weirdly want less screen time? Did he lose it to Samantha? I get Alex being upset, but she’s talking like things are over without ever telling Maggie how important this is to her.

I’m giving this one a 3.5 out of 5, which would be higher if they’d just explain what the hell is going on with J’Onn being benched.