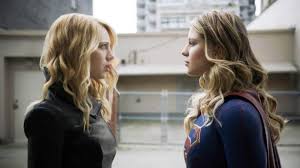 No, really, I love it. Who does your hair?

Supergirl had a rough start with her first episode of the season, “Girl of Steel.” It doesn’t get a lot better for her in “Triggers.” They contrast Kara being all alone in a series of small scenes that show Alex and Maggie flirting and being domestic, and the mother and daughter from last episode, Samantha and Ruby Arias. Just to make sure and drive the point home, Kara finds Mon-El’s copy of Romeo and Juliette that he never got to finish, marked with notes from him for her. Ouch.

Samantha and Ruby discuss the events at the waterfront last week, with Ruby convinced her mom has powers and Samantha denying it. After this, Lena comes to CatCo, which she bought last episode to save it from Morgan Edge. Miss Tessmacher greets her warmly, but James Olsen didn’t know she was coming, and isn’t thrilled that she plans on taking an active hand in the running of the place. I kind of wonder what Cat thinks about all this, but Calista Flockhart isn’t around much this season. Things get awkward between James and Lena, moreso when Kara comes in, knew Lena was coming, but then Kara rushes off for a Supergirl emergency. Lena is one of the few regular cast members who doesn’t know Kara’s secret (maybe the only one aside from Eve Tessmacher), so this starts creating tension and questions at work.

At the DEO, Alex and Maggie are bickering and Winn is desperately trying not to get involved. Eventually, we learn what’s going on, and J’Onn even weighs in on it. Supergirl comes in, surprising everyone, because she’s taken it on herself to change her level of involvement with some of the DEO alerts. We eventually get to the actual issue, which is a string of strange bank robberies where people collapse for no obvious reason. A silent alarm goes off, and Supergirl rushes off to answer the call. The villainess in question is very unconcerned about the heroine’s arrival, and we learn that her trick even works against mighty Kryptonians. Fortunately, Maggie finds her.

Back at the DEO, Winn checks out Kara. J’Onn finds traces of psionic interference, so they figure out the woman is a metahuman. I guess that eliminates aliens, at least. As Kara assures everyone she can handle it, Samantha gets taken away from a very important day at work when she finds out Ruby has gotten in trouble at school. It’s not a good scene for Samantha.

Kara stops by CatCo long enough to see more tension between Lena and James, two of her favorite people. Kara doesn’t make it much better by another sudden departure. Supergirl goes to confront the villain, and gets her head handed to her. J’Onn tries to help from the DEO, but it doesn’t work. Why J’Onn seems determined to stay out of the field this season I’m still not sure.

The team reunites back at the DEO for a briefing about who the woman is. Apparently they’re using a minor Supergirl villain called Psi, although this version seems to be a lot more like Phobia. Supergirl pulls Winn aside and confides in him about what’s been happening to her. He thinks her keeping it a secret is a bad idea, and I agree, but Supergirl insists. She then rushes off when Lena calls her.

After some more domestic issues with Samantha and Ruby, Kara gets to work. She and Lena have a rough scene. Lena is doing her best to be understanding and sympathetic, and Kara isn’t really helping much. This devolves into an argument about Kara’s disappearances from work. She gets called away and has another really, really ugly scene that almost blows her secret ID and does some damage to CatCo’s building. While Kara was dealing with this, Psi got away again.

Kara talks to Winn again, and there are few revelations about Kara’s most recent episode. Winn is about as good at keeping secrets from Alex as you’d expect, and he babbles while Samantha and Ruby have their own argument, with an unpleasant surprise for Samantha after the pizza arrives.

Alex goes to Kara’s place to check in on her sister. It’s a very tearful scene as Kara has a mini-breakdown, and Alex offers reassurance. It ends on a good note for them, but Psi on the rampage again. A lot of this scene doesn’t make sense, like two guards sharing a phobia, and Psi directing another man into having exactly what she needs him to do with his physical reactions to her mental attack. I really don’t buy either of those. Ruby, naturally, ends up in the middle of this, partially due to bad supporting cast luck, and partially due to some really dumb decisions.

Supergirl and Psi square off again, and Alex arrives to give her some encouragement. I will say Alex made some amazing time, getting there almost as fast as Supergirl, who has both flight and speed. After another tearful admission from Kara to Alex, she manages to find the resolve to beat Psi. In the aftermath, Alex sees Samantha and Ruby again, and gets a surprise about someone who is very important to her. Ruby and Samantha have another talk about superpowers and debris-influenced hairstyles.

Back at CatCo, Kara and Lena make up after their quarrel. We finally learn what Samantha’s connection to the rest of the cast is, and that even she isn’t sure what she can do. While they’re making up, Lena gets my favorite line of the episode, paraphrased a bit here: “Luthors don’t have friends, we have minions.” Things are still tense between James and Lena. J’Onn is off drinking, presumably in the nameless alien bar, when he gets an urgent message from a friend to end the episode.

What I liked: This show is probably best at relationships. The Kara/Alex one is great, and Alex/Maggie is developing nicely. I’m glad Kara turned to Winn this episode; they haven’t seemed as close as they were season one. While Ruby does some dumb stuff, I get why, and she and Samantha are close. I also enjoy the Lena/Kara friendship.

What I didn’t: The Lena/James tension seems really strong and badly defined. I don’t get what’s going on there. Psi’s powers were weird. I don’t get why J’Onn is on the inactive list this season. For that matter, while he’s been mentioned, we haven’t seen Guardian either. Or Lyla, Winn’s girlfriend. The construction site scene didn’t make a lot of sense. I miss Cat.

There were some good relationship moments, but bad action bits. I’ll give this one a low 3 out of 5. I hope they improve as the season goes on. It’s currently slipped to my least favorite of the CW/DC shows.