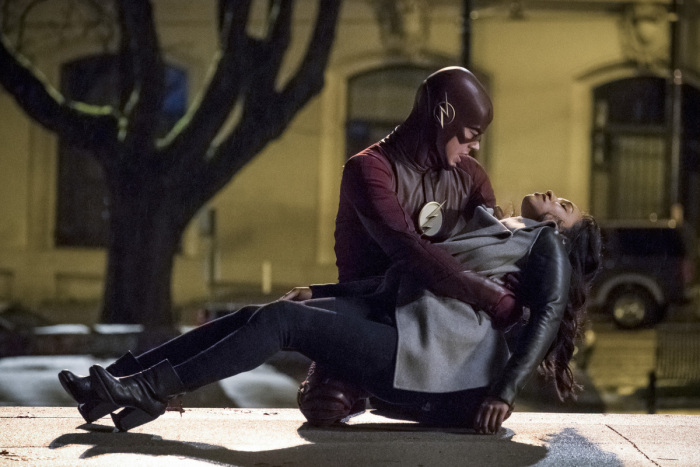 Flash hits the end of his season with “Finish Line,” the season three finale. The heroes need to find a way to defeat the menace of Savitar, which gets harder with Savitar being a future version of Barry Allen. So whatever plan they come up with, Savitar knows about from Barry’s memories. That’s a new wrinkle on time travel I don’t think I’ve run across before. There are some pretty big spoilers here, so be warned. Don’t read this if you haven’t seen it.

At the end of last episode, Savitar killed Iris. Everyone is horror-struck and grief-stricken. Things take a turn when Iris… drops drum sticks? Well, that’s something associated with someone else, and we learn that there was a switch. The dying “Iris” is HR, using his image projector, while the HR up on the roof is revealed to be Iris. Now it’s time for a quick flashback to see how this happened.

Last time, HR accidentally revealed where Iris was hidden, letting Savitar capture her. Overwhelmed with guilt, HR took the piece of Savitar’s armor Barry captured a while back, and used its property of being attracted to the rest of the armor to find their hideout. HR tried to rescue her on his own, and, when they were found out, used his image device to swap places. Fortunately for him, Killer Frost just blasted “HR,” now the disguised Iris, instead of killing her while recapturing Iris/HR.

Back in the very sad now, Tracy Brand rushes up, shocked, tears starting, saying they had just found each other. HR gasps out that he couldn’t be a coward, and that Tracy would be brilliant. He urges them to go stop Savitar and quietly dies. I did not remotely see this coming, but neither did Savitar. They also notice that Savitar took off with the Speed Force bazooka.

Killer Frost and Vibe’s showdown gets interrupted when Savitar shows up. While he was urging her to live up to her name before, now he tells her not to kill Vibe after all. Savitar requires Cisco’s unique genius to build something.

Barry, Iris, and Joe go back to the time vault. The newspaper from the future has changed, the by-line on the column now once again reading Iris West-Allen. The heroes are cautiously optimistic that they have saved Iris’ life. Meanwhile, Savitar gets a flood of confusing new memories as he “remembers” that Iris survived due to HR’s sacrifice.

Back at STAR, Julian is stunned to hear about HR’s death. Tracy wanders off to be alone with her grief. Barry says they need to try and figure out their next move. Savitar is still out there, so is Killer Frost, and Cisco is missing. The time paradox created by Iris’ survival and HR’s death should eventually wipe out Savitar, but they don’t know when. Julian also has news- he and Caitlin’s mother worked together and may have a cure for her Killer Frost issues.

Vibe is not exactly being a model prisoner, mocking Savitar and telling him he better have a plan B. Well, it turns out he does, and it includes Cisco modifying Tracy’s Speed Force bazooka. Savitar, again drawing on Barry’s knowledge and memories, comes up with a great threat to keep Cisco in line.

Barry talks with Iris and muses that there must be something better they can do about Savitar. To that end, he rushes off on his own to meet Savitar Barry makes a surprising offer, although I don’t understand how Savitar is surprised by it if he has all Barry’s memories. Maybe there’s a backwash from changing Iris’ death. Barry really does his best to live up to the heroic ideal in this scene. I’ve said this before, and will again: in the CW-verse, Green Arrow has taken Batman’s place as the Dark Avenger, and Flash occupies Superman’s spot as the Point of Hope.

Barry and Savitar go back to STAR Labs, and the team isn’t exactly happy to see them. There’s a lot of mutual mistrust and war of words. With both Cisco and Caitlin not available, Tracy is their best bet for scientific help, but following HR’s death, she’s not feeling charitable. What comes next is arguably cruel– the team gets Harrison Wells from Earth 2 to talk to her. I mean c’mom, she just lost the man she was falling in love with and his doppleganger comes to chat? Kinda messes with that acceptance stage of grief, I’d argue.

Savitar comments that it’s strange being back at STAR. Once again, things don’t quite make sense to me when he comments on something they haven’t done yet. Is he losing track of his memories, or just screwing with them at this point? Savitar starts asking a lot of biting, sarcastic questions about the deal Barry is trying to offer him, and Barry does the best he can. Savitar finally agrees to return Caitlin and Cisco, and speeds off to do that. In the wake of his departure, something happens that looks bad for STAR.

At Savitar’s hideout, Cisco once again tries to get through to Caitlin, and once again fails. Savitar returns, removing any doubt about what happened at STAR being an accident, and tells Killer Frost to get rid of Cisco. Fortunately, there’s a last minute intervention by Gypsy. While it’s cool she came back to help, I don’t quite get why she needed to save him if they have the same powers. Eventually, they end up at the West home. Amusingly, Cisco calls Savitar Two Face for his scars. I don’t know if that means there’s a Batman on this world after all, or if there are just Batman comics. Savitar, meanwhile, tells Caitlin not to worry about them, and that it’s time now.

Savitar and Killer Frost go on a lovely walk in the park. Just kidding, they are there to enact Savitar’s mad plan. First, they have a complication to deal with, as the Black Flash appears to stop Savitar. Turns out, Black Flash is very vulnerable to cold, which must be why Savitar recruited Killer Frost in the first place. Just as the portal is ready, there are more surprises for Savitar, who really doesn’t seem to know as much about his own past as he should. While Gypsy and Vibe take on Killer Frost, we get a scene that could’ve come right out of the comics as Flash and Kid Flash are joined by Jay Garrick to battle Savitar. We also see someone in the fight change sides, which is a help. There are some cool tricks in the fight, and Barry finally shows himself to be the hero he should be by refusing to go down the dark road. Savitar gets defeated by a really unexpected turn of events.

Later, the team gathers for HR’s funeral. I wonder if he had anyone back on his Earth they should tell? The gravestone has a great quote from Twain, and Barry shares Wells’ final worlds with Cisco, that Cisco gave him the strength to be a hero. At the end of the funeral, Caitlin makes a surprising decision to start setting up the cliffhangers for the big off-season break.

Barry and Iris finally go home and start making progress on their wedding. So all’s well that ends well, right? Of course not, how often do we get happy season finales? A huge storm starts outside, and it’s not normal. The multi-colored lightning is a big clue there. The storm gets accompanied by a small earthquake, further damaging poor STAR Labs. The team figures out that the energy disturbance is from the now-vacant speed force prison that Jay left to help out. Someone needs to go back. So someone does, in a huge surprise that suggests to me next season is going to at least start off by trying to save that person.

What I liked: I think we’re finally done with Savitar. I won’t miss him at all. It was great to see Gypsy and Jay both come back. The way that HR saved Iris was pretty clever. The big fight near the end was really well done. I’m so glad Barry is heeding Snart’s (of all people) advice to stay a hero.

What I didn’t: Savitar had some weird memory glitches which didn’t all make sense to me. I’m not sure why Gypsy needed to port Vibe away if he can do that, too. I’m saddened by HR’s death, and I don’t really like the big cliffhanger at the end. I’m really not sure how I feel about Caitlin’s decision.

It was a good episode. I’ll go a low 4 out of 5 for it. I really hope next season we get something that doesn’t involve an evil speedster. Flash has a lot of other foes.