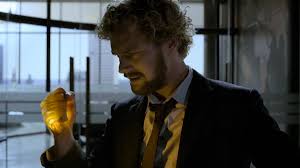 Danny gets a bright idea about elevators

“Felling Tree with Roots” isn’t the most action packed episode of Iron Fist, but you could argue it’s a pivotal one. A lot of things change, and we learn about others. There were a lot of surprises that I did not see coming, and I like how they did the majority of the reveals. They also tied it more closely to the other Netflix/Marvel series.

The episode starts with Harold Meechum sleeping in that weird tube of his. His rest is rudely interrupted when some representatives from The Hand come calling. They are very displeased with some of Harold’s recent activities, and expect him to atone in a very Japanese Yakuza kind of way. Harold is trying to talk his way out of trouble when Danny walks in at what is arguably the worst possible moment. There’s a brief fight that the Meechum/Rand side wins, and Danny sees how ruthless Harold can be. Harold tries to play the whole thing off as a bonding experience between them, and spins a few new lies for Danny.

Joy stops by Ward’s office to castigate him for his really foolish behavior at the clinic. They argue about his choices and the secrets he’s keeping. I don’t like Ward at all, but you do sort of have to feel bad for him with the spot he’s in. This delightful family scene gets broken up by Harold calling, telling Ward that Harold needs his help. A frustrated Joy storms out when Ward won’t tell her who’s calling.

Danny’s next stop after last time’s grueling tournament is the Chikara Dojo, where Colleen helps patch him up. Apparently, she’s pretty good with needle and thread. She also mocks the “Madame” part of Madame Gao’s name, which is pretty funny. The scene also shows fairly conclusively that either Danny doesn’t know the power of the Iron Fist can heal, or that the writers decided to ignore that part of the hero’s background. Either way, the scene eventually changes from friendly banter to a love scene. Honestly, I prefer the comic book pairing of Danny and Misty Knight, but I guess she’s busy dealing with Luke Cage’s mess.

Ward goes to Harold’s place, and definitely looks the worse for wear. This scene illustrates a lot about how cold Harold is, as he greets Ward in a conversational tone while disfiguring the bodies of the two Hand men. After some manipulation and abuse, Harold convinces Ward to get rid of the bodies. There’s a small logic failure here. If The Hand is watching close enough that they know Harold left to visit Danny, shouldn’t they both know their men went in and didn’t come out, or at least see Ward struggling with the bodies? At any rate, Ward eventually ditches the bodies in a park, after finding some more of his pills and having a very odd, one-sided conversation.

After that eventful night, Danny and Colleen have a kind of sweet morning-after scene before he goes off to work. That was probably the high point of Danny’s day, because it’s all downhill from there. He gets to work and asks Megan to find all of his Dad’s old files. Joy comes by to tell him what he’s to say at the board meeting later today, which Danny is less than thrilled by. Their bickering about this is interrupted when Danny gets another visitor: Madame Gao, flanked by two big thugs who wait by the elevator.

Gao has a very odd talk with, or frequently at, Danny. They cover such topics as feng shui, Danny’s responsibilities as Iron Fist, her relationship with Danny’s father Wendell, and a business opportunity. Gao also mentions Daredevil and Luke Cage, although not by name and leaving Jessica Jones off the list, and obliquely threatens Colleen and Claire Temple. She’s very smug and superior and not really interested in anything Danny actually has to say. Gao hobbles off when she’s done, taking the elevator back down, using a special pass card. Danny finds a new and unique use for his Iron Fist ability as he sort of follows her. At least he takes a moment to pray first.

Ward, having had a really bad last 24 hours or so, is at his desk researching trips to South America. Joy comes in, a lot more conciliatory than she was last time. She subtly hints at him going to rehab, and he agrees, sort of. They make up from their spat last night, and Joy reassures Ward she’s there for him.

Danny manages to creep up on Gao in her meeting with one of the drug rep ladies we saw earlier in the series. They talk about distribution, and give a passing reference to the Dogs of War street gang, which was part of the second season of Daredevil. They also discuss Hai-Qing Yang and his Hatchet Men gang, who Gao is supremely unconcerned about. Gao and her thugs finally leave, and Danny manages to get to the drug lady. The lady, who I believe is called Sophia, proves she’s not just another pretty face before she finally gives Danny what he wants.

Things take an odd turn at Colleen’s dojo. She’s working out when she gets a mysterious visitor, a man known as Bakuto. They’re clearly on friendly terms, and he asks a lot of questions that Colleen unhesitatingly answers. The scene really casts some doubts on where Colleen’s loyalties lie. I have an idea or two that I really hope are wrong.

Danny looks the worse for wear from his earlier adventures, and Megan helps him spruce up, which also gives her an entertaining chance to drool a bit. The only thing Megan managed to find is a box with an envelope in it that holds Wendell’s old building pass. Danny asks her about Rand being a good company, and there’s some initial banter and misunderstanding about her losing her dental plan before she gets what he meant and gives a more serious answer. Danny goes in to the board meeting and continues to make friends with his unique approach. He actually pulled off something slick, and bypassed them to go to Karen Page, reporter at the New York Bulletin and supporting cast member from Daredevil. He leaves after issuing a few fait accompli, and then pauses to add getting the dental plan back for the assistants.

Next up is another visit with Harold, but at least this one is corpse-free. Harold tries hard to tempt Danny over to the dark side, but Danny has his own plans that he’s not going to change. Harold analyzes the info Danny got from Sophia and figures out where the warehouse is The Hand is most likely using to manufacture their synthetic heroin.

Colleen has a graduation ceremony at her dojo for Daryl, the smart-ass student who seems to be the only one who has a name used more than once. Coupled with Colleen’s earlier scene with Bakuto, this leaves me very suspicious about what’s going on. Danny drops by near the end of this, and none of the students seem to recall he’s the one that footswept Daryl when he wised off. Danny fills Colleen in on what’s going on, and she decides she’s coming with him on the raid. Danny has one more stop to make which was actually fairly clever.

They once again manage to make me feel bad for Ward, bully that he is. Ward’s all set to take off on his holiday when he gets a few rude surprises. His account, that was in the millions earlier when he checked, is now empty, thus hampering his travel plans severely. As Ward flips out about this, Danny and Colleen seek allies.

Things slide really downhill as the episode moves toward the end. Joy is surprised to find out that Danny’ stunt earlier actually got them good press, but board member and all around jerk Lawrence has pulled off another, much less welcome, surprise. Joy is stunned, and Danny, Ward, and Harold won’t be too happy either when they find out.

Danny, Colleen, and their small army attack the warehouse. While Danny still doesn’t have anything close to his costume from the comics, Colleen is fighting in her white outfit which is at least close to one of her many looks from the books. It’s a very mixed victory, as the good guys take the warehouse and find Radovan, but it’s a bit too late on several fronts. Radovan tells them where Gao is heading now, and Danny is shocked. I suspect Danny at least, and maybe Colleen as well, are about to go on a trip.

Ward is furious about his account being drained, and goes to confront Harold. It’s an ugly scene with a few surprises, like where Ward got that money in the first place. Harold is dismissive and patronizing, as he has been every time he deals with Ward. I do sort of wonder what became of Kyle, Harold’s assistant earlier in the series who was always around and then suddenly vanished. At any rate, Harold pushes things a bit too far and Ward snaps in a shocking development. The episode ends after Ward has most definitely surprised Harold, and Ward is driving off by himself, smiling in a disturbing way.

What I liked: While this episode wasn’t as action packed as last time (arguably not good for a kung fu themed show), I actually didn’t miss it. I think they did some good character work here. This is the most we’ve ever heard Gao say, and it was interesting hearing the way she talks about things. I’m not sure why she needs the hulking bodyguards since we’ve seen her beat both Daredevil and Iron Fist without even touching them, but maybe that was a status thing. They did a good job showing Danny’s resolve to do the right thing, and Ward’s descent into what I believe will be full-blown madness before too long. Danny’s choice of allies made a lot of sense. No one can say Harold lacks commitment to his cause.

What I didn’t: I don’t like what seems to be happening with Colleen. I really want to smack Lawrence the board guy, even if I sort of see where he’s coming from. I mentioned the bit about The Hand guys Harold dealt with earlier. I missed Claire after getting to see her earlier in the series.

This was a character driven piece of an action series. I know some people won’t like that, but I thought it was pretty well done. I’ll give it a high 3.5 out of 5.