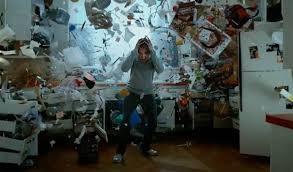 Legion is the latest in the current flood of super-powered television shows. In the comics, the character is the son of Charles Xavier, best known as Professor X, leader of the X-Men. Legion, whose real name is David Charles Haller, is a vastly powerful mutant, with a unique twist. In the comics, at least, he has a vast array of powers, but each power is controlled by a different personality. The powers he’s shown in the comics include, but are very much not limited to, telekinesis, pyrokinesis, telepathy, time travel, and reality warping. There has been some debate as to whether Legion’s multiple personalities are actual psychological constructs, or people who he has somehow absorbed when they’ve died near him.

The first episode, simply enough, is called Chapter 1 (at least it’s not called “Pilot”), opens with a montage of David growing up, his powers manifesting, and having trouble handling them. He ends up at some kind of institute where a lot of the episode takes place. The place has the strange name of the “Clockwork Psychiatric Institute,” which doesn’t really inspire confidence.

It’s a very strange place with color-coded uniforms, although I’m not entirely clear what the codes mean. David spends a lot of time with Lenny, a strange brunette girl. This being a show about someone with mental problems, I kept trying to figure out if she was real or not. I’m fairly sure by the end of the show, but even then I’m not 100%.  After the two of them spend some time watching a catatonic patient, they end up with a new diversion- a blond patient named Syd Barrett. It very quickly becomes obvious that, whatever else is wrong with her, she has a real strong aversion to being touched.

David spends a lot of time with Barrett, and they have some odd exchanges. She drops an interesting hint that David isn’t having mental problems at all, citing Einstein and Picasso as people who are “different.” The writers make the show a lot more confusing by skipping around to different time frames. It’s a good device to keep the audience guessing and also show the somewhat uncertain perspective of David, with his mental problems and/or confusing powers.

Of course, David being confused isn’t all his fault. In what seems to be the present, David is being interrogated by some very clever agents. They have gone to elaborate lengths to make sure David doesn’t know where he actually is. The agents are very aware of what David is, and are making sure he’s under their control. It’s also hard to pin down when this is supposed to be. Some elements seem very much like they are from the 1960’s, but others seem more modern.

There’s a jump back to the Clockwork Institute, and a very strange incident. Barrett is apparently leaving, and there’s some kind of energy discharge from David. As far as I can tell, Barrett and David switch bodies somehow, which leads to a lot of confusion. What’s really entertaining about it is the confusion on the agent’s face as David is telling him about what happened.

A lot less amusing is what happens next. There’s some weirder event, as David has some kind of meltdown. Unfortunately, when someone with his powers has this kind of a problem, it goes badly for everyone around. David changes the construction of the Institute around him, and it’s not a smooth transition. His powers aren’t nice and neat and clean.

He throws a fit during his interrogation as well. He clearly has some very powerful telekinesis in this scene. But they have precautions in place and David goes down. At some other point, he ends up going to stay at his sister’s house, and she’s both happy to see him and a bit nervous. David doesn’t make things any better when he has another small incident with his powers while staying in her basement. He’s also having conversations with Lennie, his friend from the institute. At absolute best, there’s no way she’s physically there.

After some really weird flashbacks or dreams, which include a dance number and some song in French, David wakes up in a specially designed trap that the agents are using to keep him and his powers under control. The agents seem to be looking for Barrett, which David was doing earlier as well. The Institute is claiming they have no record of Barrett being a patient there. I’d think she was a figment of David’s imagination if the agents weren’t so set on finding her as well. There are more weird flashbacks as David is out in the real world, and being followed by a man and a woman. Then, in the now (this is confusing, I know, but so is the show (by design, I think.). David gets some kind of weird warning that seems to be from Barrett that helps him escape from the agents.

The episode ends with David being rescued by a strange group of people at least some of whom have powers. There’s an impressive fight as the group gets David out of the institute and down to a lake. We see a few familiar faces as David is hurried off to what seems like it’s going to be the next step on his very peculiar adventure.

What I liked: This was well written. A lot of strange things happened, but it certainly held my interest and attention. They managed to work in some humor and some really interesting shifts in time and perspective. I also liked the never-named interrogator, who seemed to doing his best to keep the rest of his team from killing David.

What I didn’t: It was an interesting narrative device, but some of the time and place changes got a bit confusing. I’m not sure why they want to do a show about an extant Marvel/X-Men character, but keep him separate from all the other characters out there. Granted, it gives them more freedom for their stories, but it still seems like an odd choice.

This was different, that’s for sure. I liked it. I’ll give it a 4 out of 5. A lot of it might be curiosity about where they go next.