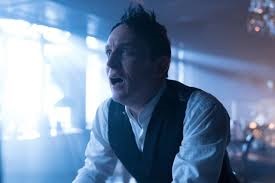 Someone’s not happy to be back…

After the government agents came back last week, it’s time for the city workers. Gotham returns from winter break with “Ghosts,” continuing their “Mad City” season. I’m really not wild about shows naming their seasons or even halves, as Agents of SHIELD is presently doing, but maybe that’s just me.

At any rate, things are looking about as bad as I expected them to after the mid-season cliffhangers. Gordon shows the amazingly poor judgement to show up at Mario’s funeral. Thankfully, Bullock stops him from intruding. What was the plan there? “Hi, sorry I killed your son/fiancé. Coffee?” I’m also really annoyed that apparently, Gotham’s CSI team utterly sucks, and hasn’t managed to find the knife Mario dropped when Gordon shot him. That’s a bit of unbelievability engineered just to make more drama. Poor writing, in my opinion.

On other news, Penguin goes back to City Hall, still trying to reach Nygma. Ed isn’t answering, and Penguin stalks into a news conference where he expects more bad news. Instead, he gets applauded over the recently released statistics about Gotham’s crime and unemployment both being down. Of course, it helps when you’re running the crime families. Maybe he’s sending the thugs off to Metropolis or Central City? In Nygma’s absence, a slick-looking man named Tarquin is acting as chief of staff, and is the epitome of slimy PR guy. Tarquin sets up an interview with Margaret Hearst, a hard-hitting tv reporter with her own show (and maybe a nod to the Hearst family, famed for their publishing?).

Gordon goes home to find uninvited company in the form of Zsasz, Gotham’s most notorious hitman and hired gun for Falcone.  Zsasz tells Gordon that his time is coming, but seems almost friendly about it.  Zsasz is getting odder as time passes.

Continuing another of the surprises from the break, Selena is visiting with her suddenly-returned mother, Maria. It’s not an easy reunion, as Selena is very understandably upset with the woman for abandoning Selena and being gone 11 years. Maria is trying, I’ll give her that, but Selena isn’t buying it. I can’t say that I blame her, really.

Penguin gets the conditions for his interview from Miss Hearst, which just seem custom-made to set him up for something bad. Sure enough, complications start almost immediately when he sees the ghost of his late father stroll by. They did title this one well, at least.

Since we can’t really get away from the required weird case of the week, Fox calls Gordon and Bullock to the Medical Examiner’s office. A woman was killed in an accident on the train tracks, which happens in big cities. Of course, the victim isn’t usually someone who the morgue had a few days ago after she was stabbed to death. Gordon and Bullock can’t get an easy case. Or maybe that’s what they were doing during the hiatus. The scenes at GCPD end with Lee storming in, wearing her widow’s black, and demanding Bullock arrest Gordon for murdering Mario. She really should have known better on several levels. Then again, she’s very grief-stricken.

Penguin is napping at home after a hard day. He gets two visits. One, another spectral appearance by his father. The other, GCPD officers telling him his father’s remains were stolen from the cemetery. From this point on I was pretty sure I knew what was going on, but it was fun to watch. Penguin’s a vicious killer who I have to admit I don’t feel a lot of sympathy for.

Gordon and Bullock pay a call to the city morgue, which I don’t think we’ve seen before in the series. A very suspicious morgue attendant gives them some not real helpful answers. Gordon and Bullock decide to stake the morgue out and see if they can learn anything.

Out at Wayne Manor, Bruce and Alfred puzzle over the crystal owl they stole. It’s vaguely pretty, if you’re into glass-like raptors, but doesn’t offer any readily apparent clues about why the mysterious Court of Owls would want to kill to keep it. The writers end up showing us what the secret is as Bruce and Alfred step away to answer the door. Bruce is a long way from the World’s Greatest Detective he eventually becomes. Maria is at the door, dropping off a box of stuff for Selena before she leaves town again. That was an odd visit and really makes me wonder why she came back at all. Bruce appeals to her not to leave, and tries to patch things up between mother and daughter, citing his loss of his parents. That gives us a sappy scene later.

Bullock and Gordon see Dwight leave, jabbering away on his phone and looking nervous. Harvey, for some utterly idiotic reason, wants to grab Dwight now, but Gordon suggests they follow him. Which I thought was the point in the first place. Really, Harvey, why else have you been sitting here in the car?

Lee and Falcone plot revenge against Gordon, and Lee seems to have gone as nuts as Barbara usually is. Jim has an effect on his exes. While the soap opera wailing and plotting goes on, Gordon and Bullock end up at a really weird meeting. Someone is preaching, leading a weird cult. The object of their veneration is Jerome, the psycho killer from a while back who most fans seem to think is the early version of the Joker. I’ll say again that doesn’t work at all and drop it. Our heroes get interrupted when Zsasz starts trying to collect on Jim’s contract. The only reason Gordon didn’t die from the sniper fire was a combination of luck and his previous wartime experience.  Gordon leads Zsasz away, and they end up fighting in a kitchen somewhere. Gordon wins, and then… leaves Zsasz out cold on the floor, not even cuffed? What in the hell, Jim? He just tired to kill you and shot at Bullock and a bunch of civilians. Maybe, oh I don’t know… arrest him???

Penguin gets more ghostly warnings from his dad, in cryptic fashion. While he’s living through a Ghost Hunters episode, Lee visits ex-Captain Barnes at Arkham. Barnes goes on a tirade about what the Tetch virus did to him, how he’s never seen more clearly. As he reaches maniacal levels of babble, Lee starts to realize that maybe Gordon wasn’t so far off base after all.

The Kyles (Selena and Maria) have dinner with Bruce and Alfred, and Alfred gets picked on by the ladies in a unique kind of way. Since they’re at his place and he made them dinner (and has been driving them around), that’s kinda rude, really. Maria also regales them with tales of her past heists, which everyone but Alfred enjoys.

The next morning, a very much the worse for wear Penguin goes to the office. He gets a few clues about what his father was trying to tell him, and follows up on them. What happens next is ugly and brutal and more like the Penguin we all knew was lurking in there somewhere. Of course, this puts him in a bind with that live interview about to happen. Penguin is rattled for that, and doesn’t come off looking too good.

Lee pleads with Falcone to call off the hit on Gordon. Falcone seems more saddened than surprised, and makes an observation about Lee she really doesn’t like hearing. Zsasz goes to Gordon’s place almost killing both Gordon and Bullock. The fight ends in an unexpected manner that may lead to more complications later.

The episode ends on a few ominous notes for next time. We see what’s behind the haunting of Penguin, and it’s about what I figured, but they were even more clever than I’d thought. Someone did some really good research. Maria and Selena have a run in with someone from Maria’s past that looks like it’s going to cause issues for the Kyles and Wayne family.

Dwight and his mysterious cult leader are making plans and discussing the raid (does two people count as a raid?) by Gordon and Bullock. Dwight used to work at Indian Hill, the source of much of Gotham’s current craziness, and he got himself some souvenirs. From the look of the final scene, a lot of souvenirs. This is going to get ugly.

What I liked: Lee isn’t stupid. While I understand her rage and grief, I’m glad her visit to Barnes helped snap her out of it. Zsasz’s quiet malevolence and utter sociopathy is getting quite entertaining. The scheme against Penguin was really nicely planned and executed.

What I didn’t: Bruce and Alfred were really dense in missing the owl’s secret. Harvey was being really stupid at the stakeout. Gordon leaving Zsasz on the floor was just amazingly dumb. And I still can’t believe that no one found Mario’s damn knife.

I liked most of this episode, but the dumb points were kind of glaring. I’ll average it out at a low 3 out of 5 and see how the second half of the season proceeds.