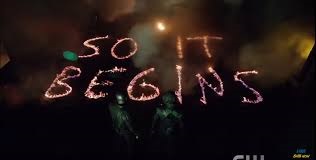 and we have a title…

Following Church’s death at the blades of Prometheus, Green Arrow is trying to find out what’s become of Church’s phone. His phone keeps moving all over the city, leading Green Arrow and Spartan on a merry chase. Bizarrely, Spartan’s helmet is now see-through, so you can clearly make out his facial features. I’m not sure how that’s an upgrade. I hope that wasn’t something Cisco did. They are finally led to a spot where fire spells out, “SO IT BEGINS,” both an ominous warning and this week’s title.

When the pair get back to the Lair, they talk with Felicity, who makes a Babylon 5 joke. She also pushes Oliver to tell the rest of the team about Prometheus. She makes this argument a lot. In Oliver’s defense, not that I frequently agree with him, the last time he gave in to Felicity about the team, one of his more dangerous foes found out his secret identity. Oliver himself says he doesn’t want to put the rest of the team in danger, which is valid since, so far, the only competent one seems to be Ragman.

For his day job, Oliver is giving another interview to problematic reporter Susan Williams. Thea doesn’t think that’s a good idea, but Oliver isn’t listening. Lance wanders in late, which apparently his happening a lot lately, worrying Thea. After Susan leaves, Thea teases Oliver about the reporter being his girlfriend. Thea brings up her new plan for the city, hosting a music festival. This would have been a great chance for some celebrity guests, since DC is owned by Warner Brothers and all, but that never actually happens.

Prometheus, meanwhile, is out stalking the city and evidently killing… a housewife? This ugly murder brings out District Attorney Adrian Chase to the crime scene. Chase and Green Arrow have a chat, and both are equally clueless about why this woman was killed. Weirdly, GA tells Chase about Prometheus, which is information he’s still holding back from the recruits. I’m not sure I get that choice. DA’s are, as a rule, prosecutors, not investigators, and you have to have someone in custody to prosecute them. As they talk, a call comes in about another seemingly random murder. Back at the Lair, Felicity once again pushes to tell the rest of the team about Prometheus. Diggle, in turn, suggests she steal some evidence from her boyfriend Detective Malone to get more information on the killer. Ya know, I’m not sure how much sense it makes at this point that the gear in the Lair (which has been moved/rebuilt how many times now?) does a better job than the police lab.

In a few awkward scenes, Felicity visits Billy and does the discussed stealing. Thea continues to dislike Susan Williams, who is now running a story on the “Throwing Star Killer.” Ok, two things here. 1) that’s kind of Susan’s job. 2) she’s not attacking Oliver, which is what was annoying Thea before.

Felicity continues the running joke about Susan being Oliver’s girlfriend, and, at least initially, fails to learn anything from the weapon she risked her relationship and jail time for. She’s started to run a program to find any at all kind of link between the victims. Ok, that I’ll buy she can do better than the police. Then, in a pointless action scene, there’s a report of the killer at the mall, which leads to the team going there to fight a few gun nut random citizens who are creating a panic for absolutely no good reason.

The team is finally brought into the loop about Prometheus, and are not happy about being kept in the dark. Felicity agrees with them, and is supported by Ragman, who seems to have gotten over his issues with her. Thea, meanwhile, makes a disturbing discovery about Quentin Lance.

The team has another argument about information being held back, and they all learn that Felicity’s program has discovered that the recent murder victims have names that are anagrams of those from Oliver’s list/book/journal back in season one. The team is stunned to learn about Oliver’s hunting when he first came back to the city, and call him a serial killer. That never occurred to me to describe what he was doing, and I don’t think it fits the technical description, but I can see their point. Oliver claims to have not looked at the book in four years. No one is happy about this, but Artemis/Evelyn seems to have the biggest problem with it. She says this is because back when they met, Oliver stopped her from her own vengeance killing spree.

Thea goes to Quentin’s place, which is a disaster. They have a talk about his sliding back into bad habits. The new recruits meet up at Rory/Ragman’s studio, and debate his work and Oliver’s penchant for secrets. One of the interesting points to come up here is that Evelyn is just 17, which really makes me wonder about her being out risking her life with the team like this.

Oliver goes back to one of his own old habits, target practice with tennis balls, although in a more high-tech fashion than the old days back at the Foundry. He and Diggle talk about how far he’s come since back then. Felicity pages them back to the computer room, which really makes me wonder how big the Lair is. She has a lead on more potential victims. The team is going to split up and each cover one of the targets. Since Prometheus is so dangerous, this sounds like a bad plan to me.

In the subway, Artemis finds out that her guy is the next target when Prometheus shows up. She really needs a costume by the way. She has a leather jacket, hoodie, and face paint (shades of Oliver’s first costume). Prometheus, to no great surprise, is way out of Artemis’ league. Felicity calls Green Arrow in to check on her after Artemis went off coms in a huff, just before the attack (much like Sara on last week’s Legends of Tomorrow). Prometheus runs off, leaving the others to escape by a really unlikely trick arrow.

Artemis and Green Arrow patch up their earlier spat while Oliver literally patches her up. Felicity goes to talk to Billy. She surprises him, and then gets surprised in turn by his reaction. The team gets to go to Thea’s (largely unseen and unheard) festival and seems to be getting along a lot better. Elsewhere, someone makes a very surprising (and highly unlikely) discovery. Oliver and Felicity make a surprising discovery about Prometheus’ weapons.

What I liked: Hopefully Oliver is done keeping secrets from everyone, although that might require a personality transplant. The action, as usual, was good, even if it didn’t make a lot of sense at times. Billy’s reaction to Felicity’s reveal was amusing.

What I didn’t: Sadly, a lot, from the big to the small. Spartan’s new helmet makes no sense. The team seems to be at first overly upset, then magically fine, about Oliver’s past. The whole bit at the mall served no purpose. Artemis needs a real costume. I’m not sure I get Felicity’s push to tell the team everything, especially since she was keeping her own secrets until recently. The supposed big reveal at the end makes NO sense at all. I’m hoping it’s some kind of red herring.