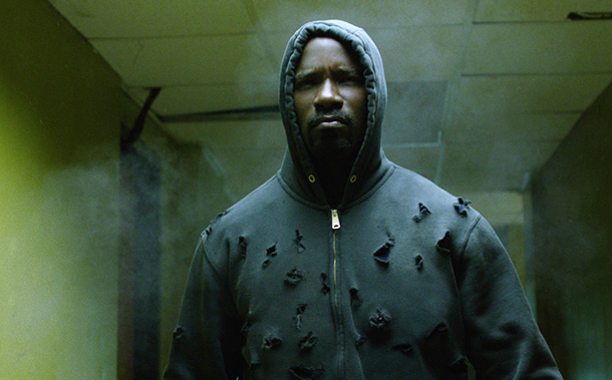 Heck with rent, how does he afford clothes?

The third episode of Luke Cage is called, “Who’s Gonna Take the Weight?” and it’s a good follow up to the tragedy near the end of “Code of The Streets.” It starts off with a big firefight and people fleeing the Crispus Attaks building. After a couch goes sailing out one of the upper floor windows, Cage strolls out, hood up, carrying a large duffel bag. Then we get text of “Earlier That Day” to explain what we’re seeing and how Cage got here.

The local news is covering the death of Pop, whose name was Henry Hunter. Stokes watches, and, to his credit, looks saddened by it. Cage also listens as he plays with the Swear Jar, which seems to be his talisman from the shop. As he walks to the shop, he passes Genghis Connie’s, which is still open, but has plywood over the windows from the damage done during Cage’s fight with Stokes’ men. Cage pauses at the memorial that has sprung up at the shop, repeating Pop’s mantra, “Always forward.”

One of the things I think is very well done in this episode is Cage’s grief. He’s sad, and furious, but he handles it maturely, channeling it into motivation. He doesn’t sit around and mope, or drink ridiculously, or indulge in self-pity. He does what he has to do. The series in general seems to have a really impressive level of maturity, not just in subject matter but in how the characters behave.

Elsewhere, after effects from the botched robbery continue to echo. Some of Stokes’ men are moving a van full of toys, which are cover for something else. They, in turn, get hit by some of Domingo’s men, who carefully shoot Stokes’ thugs but leave them alive and steal the boxes. Misty and Scarfe show up to work this crime, too. After learning nothing useful from the scene, they go to the hospital to try and learn what they could from the victims that survived.

At the undertaker’s, Cage gets a surprise that hits a lot of people, catching them completely unprepared: how much a funeral and casket cost. After some back and forth with the undertaker, Cage is interrupted by Stokes, who announces he’s going to cover everything, and treats Cage in as condescending a manner as possible. They verbally spar a bit about Cornell’s word and the parlay that was supposed to protect Chico. Neither is impressed with the other.

Cage returns to the shop, which Bobby Fish, the resident chess player, has been trying to straighten up. Oddly, there is crime scene tape on the windows in an X, like for a hurricane, but none on the door, which makes no real sense. Fish and Cage talk about ways to save the shop. Cage begins forming his plan for vengeance on Cornell, which Fish is concerned about, since setting off Cornell Stokes’ temper is what set all this in motion in the first place.

With so many scenes in the hospital, I was really expecting to run into Claire Temple, the only character to be in all seasons of all shows of the Marvel/Netflix series so far, but she doesn’t actually turn up. Since she’s credited as being in the series, presumably she’ll be in a later episode. What we do see is Scarfe and Misty talking to Chico and not getting anywhere, predictably enough. Luke shows up as well, and makes a bit more progress with Chico after a small confrontation with Misty. Chico does give Cage enough information to let Cage refine his plan more. Chico also shows he’s not entirely stupid and makes an astute guess about Cage.

Stokes plots with Joe the undertaker at the funeral home, and we learn about more layers of Stokes’ empire and at least one way he manages to avoid getting caught. It’s good having an undertaker in your pocket. Even as he plans more crimes, Stokes is taking care of Pop’s arrangements. Stokes does get a great line about Tone’s passing, “Nothing humbles a man like gravity.”

At Harlem’s Paradise, they continue another trend on the show, some really good music. Stokes watches, looking out over his empire and smiling. But we also see his Empire suffering losses. Cage is on a one-man rampage (granted, helped by his powers), taking out a few of Stokes’ drop places where he stores money. Cage does this to trigger a contingency plan he’s learned about. He’s not remotely being subtle, taking gunshots at no range and breaking the bad guy’s weapons.

Word finally gets to Stokes, and he’s not happy. Mariah is even less so, as workmen are all over her building getting things ready. She doesn’t want to be publicly connected to criminals or damage her name. She and Stokes argue about their methods. Stokes is a flat-out criminal, and Mariah either is actually trying to help people or believes her own press. Stokes calls her building Fort Knox, which she isn’t happy about.

Misty and Scarfe banter at their office. She’s building a reasonable theory that Cage is in the middle of all this. After all, he was the only one working for both Stokes and Pop when all this went down. Scarfe gives her a hard time about having hooked up with Cage.

Stokes gets another blow to his ego when Domingo strolls in to Harlem’s Paradise. It’s a rare daytime scene there, so you can actually appreciate how beautiful the building itself is. Domingo has an interesting analogy for Stokes involving the Plover bird, which is entertaining. It does make me wonder if movie bad guys all learn at least one bit of trivia just to belittle their foes. Stokes realizes he’s got a lot going against him, as Domingo essentially declares war over the gun deal that went south and started all this.

That night, Cage attacks “Ft. Knox.” He puts in his earbuds and just wades through the defenses like they’re nothing. It was a nicely done action scene, but it didn’t get me excited like some of the fights in Daredevil or Jessica Jones did. What I finally realized was this: Daredevil gets hurt all the time, and seems to end every fight at best out of breath, usually bleeding. Jessica faced off against Kilgrave and the danger wasn’t always directly to her, but at those around her that she cared about. Here, the thugs have no chance of stopping Cage. It’s a scene that’s cool to watch, but there are no real stakes here. Cage walks out, triumphant, with one of the many bags of money Stokes had stashed there.

Later, Misty and Scarfe examine a really impressive amount of money left behind by Cage’s raid. Misty begins to wonder if the whole idea wasn’t just to get the money off the streets. If it’s in police evidence, whoever owns it (Stokes, they both know) can’t use it. Misty is really against vigilantes. Scarfe is in favor of them, and is a very burned out and cynical cop, apparently pushed over the edge by the Battle of New York, which they keep calling The Incident. It’s an interesting study in contrasts.

What comes next is a really nasty betrayal. We learn that someone is not on the side it seems they are, and they kill someone. They then go to Stokes and not only claim a reward for the death but give him information about Cage. Stokes is stunned that “the dishwasher” is causing him all this trouble.

Bobby Fish and Cage talk at Pop’s. They want to keep it open, and Cage donates his bag of recently stolen money to the cause. They both talk about how much pride Pop always had in the shop. Later, Cage goes to Connie’s and eats what looks like damn near his weight in food. He and Connie talk briefly. The episode ends as Stokes pops up showing just how ruthless he is and what kind of weapons he has at his disposal. It’s a bit of a cliffhanger ending.

What I liked: Mike Coulter’s portrayal of Cage is fantastic. I like his acting and the writing for the character. He’s not just tough, he’s also smart, figuring out just how to hurt Stokes, although he apparently underestimated him. I like how many people showed such loyalty to Pop. Stokes is vicious, but he has layers to him, and his debate with Mariah was interesting to listen to. The betrayal was a surprise, but it made sense. I’ve really enjoyed the music so far.

What I didn’t: Like I said, most of Cage’s action so far, he’s just not in danger. It’s like Superman beating up on bankrobbers. And I’m wondering about the wisdom of wearing earbuds in combat.

I’m really enjoying this so far, but that’s about what I’d expect from the Marvel Cinematic Universe. I’m looking forward to the next installment. I’ll give this a 4 out of 5.