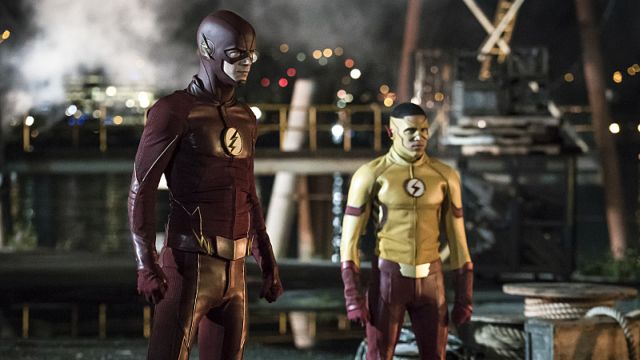 Flash and “Don’t Call Me That” Kid-Flash

At the end of last season, Barry once again gave in to temptation and returned to the night of his mother’s murder. It must be getting very crowded at that moment in time, with so many versions of Barry and Reverse Flash cluttering up the background. This trip, Barry saved his mother and caused a massive paradox, changing many events in his timeline (and presumably changing things for Arrow and the Legends of Tomorrow folks as well, since it’s a shared universe. Maybe this is how Supergirl gets integrated into the CW-verse?). In “Flashpoint,” a name full of meaning for a lot of DC Comics fans, we see the new world.

All of Barry’s relationships have changed, since he originally lost his mother when he was so young. One of the first examples of this we see is that he doesn’t know Iris. He tries to work up the nerve to ask her out at Jitters, either the only place in Central City to get coffee or a local chain. Just as he almost manages it, a new bulletin pops up about the Flash and Rival fighting. Barry races off to watch, doesn’t help, and doesn’t put on his costume. Because running around using your powers in public with no mask is a great way to keep your secret identity, right? Rival battles Flash, in this case, Wally West in what looks like the classic Kid Flash costume from the comics. In my personal opinion, this is one of the best costumes in comics. Rival gets away and Barry tells Flash he’ll get him next time.

Barry then returns to Jitters again and this time uses his powers to steal Iris’ purse as a conversation starter, claiming she dropped it. So, not content with changing the world for his own selfish desires, now he’s using his powers to steal and then lying about it. Barry is seeming less heroic all the time. They talk about shared memories of grade school, which I guess was early enough that Barry’s time meddling hasn’t screwed it up. Barry needs a good talking-to from Rip Hunter over on Legends. Or maybe Doctor Who. One interesting thing for me was their teacher, Mr. Hinkley. With a near infinite number of names to choose from, I always wonder when one is used by seeming coincidence. Ralph Hinkley was the name of the main character from The Greatest American Hero, who was a teacher. I wonder if the writers did that a nod. Barry manages to ask Iris out almost in spite of himself. As bad as he was babbling, I’m not sure why she said yes.

Barry still has his job at CCPD, but instead of Captain Singh, in this timeline his boss is Captain Julio Mendez. Another nice acknowledgment of the 90’s series, not only is this the character name of Barry’s lab tech from that show, he’s being played by the same actor (Alex Deserte). I do enjoy that DC does that with so many of their shows. Barry is keeping Reverse Flash prisoner in an abandoned building, where he was somehow or other able to make a power-negating cage much like Zoom used on Earth 2. Think about this, Barry. You’re patterning yourself after Zoom. Is this really the road you want to be on? Like several other things in this episode, I don’t know how Barry knew how to build this, did it with no help, and managed to keep Reverse Flash a prisoner until it was built. We also learn that Joe West misses a lot of work, and it’s later implied he’s an alcoholic, which I guess would give him another point in common with Quentin Lance over on Arrow.

Thwane, the Reverse Flash, taunts Barry a lot, and says they have a common enemy: time. Thwane is the one to coin the name “Flashpoint” for this alternate reality. What I’m wondering is this: if screwing with time is such a big deal, how do the Legends folks get away with it? If it’s only a problem if you do it via speed powers, how did Thwane manage to change so much back in the original time line (Flash Season One?). There’s a logic breakdown in there somewhere.

After a brief scene at home of Barry being happy with his resurrected parents, he goes back to work. Mendez is once again displeased at West’s absence. Barry speeds to Joe’s place, goes in (drunk or not, a police detective leaves his door unlocked?), then gets Joe dressed and zips him to work. Joe is confused, but is apparently used to memory glitches as part of his alcoholism. West more or less tells Barry to back off while Barry tries to help him. He then sees Iris come in for their lunch date, and announces his disapproval to both of them. Iris doesn’t let that stop her.

They talk about the strange connection she feels to him, and Barry suddenly gets this weird sort of flashback of a bunch of his memories of Iris. Before their date can proceed, word comes over the radio about another Rival vs Flash fight, and Iris makes her excuses to disappear. This leaves Barry free to go to the fight. He watches Flash lose and get blown out a window. Barry tries to catch him but blows it for no apparent reason. Flash lands in a dumpster and Barry unmasks him as Wally.

Wally has no idea who Barry is, but takes him to his secret headquarters in a mostly abandoned building. They also meet up with Iris, who wonders if Barry is some kind of obsessed Flash fan. Barry calls Wally Kid Flash in passing, which becomes a running joke through the episode. Wally finally admits he needs help, and says the only one who can help them is Cisco Ramone.

In this timeline, Cisco is rich and kind of a jerk. The Wests and Barry go visit him, and he asks them to leave, not quite politely. Ramon Industries bought out what used to be STAR Labs (thus saving the set designers and builders more work), and Cisco wants nothing to do with Team Flash. He made the friction-proof suit, and wants out. What the connection would have been between Cisco and Wally is not explained. Cisco saw someone killed by a speedster in the method Thawne-as-Wells favored, which apparently led to him bailing. I wonder if it was Wells, since he doesn’t seem to be around?  Barry starts to make a decent appeal to Cisco, but has another of his memory episodes and loses track of what he’s saying.

Knowing something is wrong, Barry goes to see his captive. An amused Thawne realizes why Barry is having memory problems that Thawne isn’t. Thawne makes reference to time “setting like concrete” which is similar to some of Rip Hunter’s concerns in the past. Thawne mocks Barry and says that Barry will come to Thawne and beg him to finish what he started. One of Thawne’s parting shots is asking Barry, “Now who’s the villain?” It’s a fair question at this point.

Barry decides he’s going to force the issue. He rounds up Team Flash, including Caitlin Snow, who is a pediatric optometrist in this reality. Barry does all this in costume then unmasks. He says he needs their help, and, eventually, they agree to work together to stop Rival. Between them all, they come up with a decent plan, which Wally starts ignoring almost as soon as the fight starts. Barry almost manages to win in spite of Wally, but gets another memory flashback/seizure. Somehow or other, Captain Mendez learns of the fight and sends everyone out to help Flash. Does he have some version of Cisco’s metahuman ap? Wally gets stabbed, Barry goes down, but Joe manages to save the day. How he got there that fast when the fight was happening at superspeed is another question I don’t have an answer to.

Back at Cisco’s company, Wally is in the med-bay but isn’t healing like speedsters are supposed to. Aside from another push on Barry to fix things, I don’t know why this would be. Cisco comments that crimefighting sucks and this is why he wants no part of it.

In a moment that would be a lot more heartbreaking if I wasn’t so annoyed at Barry, he goes to see Thawne and agrees that he needs to let Thawne out. Thawne isn’t exactly a gracious winner, forcing a painful admission out of Barry. They go back to the night of Nora Allen’s death yet again and Thawne kills her again, if “again” is the right term under these circumstances. Barry gets his memories back, returns to the West home, and everything’s fine… almost. A passing comment and reactions to it tell Barry the present still isn’t the one he remembers. Elsewhere, Edward Clariss, Rival, gets woken up in the middle of the night by voices, and the world “ALCHEMY” is carved into his bedroom mirror. Presumably this Dr. Alchemy, one of the Flash Rogues who hasn’t turned up on the show yet.

What I liked: The alternate Cisco and Caitlin were amusing. I loved seeing the first live action version of the Kid Flash suit. They dug deep in Flash lore to find Rival, even if he looked nothing like his comics version. It was fantastic they gave a nod to Mendez/Deserte, so now all three of the major characters from the 90’s show have turned up here on the CW.

What I didn’t: So very much, sadly. Flash is usually my favorite hero show. Barry is being a spoiled kid, willing to change history for his own selfish ends. Isn’t that what a villain does? This episode has a lot of questions that aren’t answered. And while I admit it was jam-packed, I’d really like to have seen a passing mention of at least some of the Arrow/Legends characters. I don’t like that I’m this annoyed at Barry, usually one of my favorite characters. Can we have our hero back, please?

I’m giving this episode a 2.5 out of 5, and that’s arguably generous. I really hope the season improves from here, and Barry grows up.