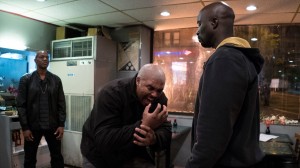 With two seasons of Daredevil out, and one of Jessica Jones, the Netflix corner of the Marvel Cinematic Universe moves on to Luke Cage, third of the original four announced series. I’ve enjoyed Luke in most of his comic incarnations, and thought Mike Colter did a great job on the Jessica Jones series, so I was happy to see him stand up as the star here. I really enjoyed the opening episode.

The opening scene is in Pop’s Barber Shop. There’s a lot of teasing back and forth, as various characters talk. Luke starts off in the background, just sweeping up, until he speaks up about the discussion about basketball. Things get a bit tense at one point, but Luke’s quiet confidence backs the other guy down nicely, with no punches thrown. That same confidence gets him some attention from the only woman in the scene, which leads to a lot more static coming Luke’s way as he goes into the back room.

Luke and Pops have a quiet scene back there. We get a lot of hints about both of their backgrounds. Pops calls Luke both Mr. Bulletproof and Power Man, the second of which is Luke’s codename in the comics. There’s a very distorted version of what Luke went through in the Jessica Jones series, and mentions of his late wife, Reva. Pops urges Luke to use his powers (which we get a demonstration of)  to help people, which Luke has no interest in. He just wants to lay low and live his life.

While closing up the shop, Luke has a run in with co-worker Chico. Chico looks like he’s up to no good, and gets hostile when Luke tries to find out what’s going on. In keeping with his “live his life and be left alone” philosophy, Luke just shakes his head and lets it go. Pops comments that he could pay Luke better if he wasn’t getting paid in cash under the table, but Luke doesn’t have a choice.

Walking to his next job, they tie Cage to the larger Marvel Universe and do some nice set up for his situation. A street vendor is hawking raw footage of “The Incident” which sounds like it’s the Battle of New York from Avengers. Luke chats with a few people before he has a run in with Miss Lin, his landlord. Luke apparently is late on his rent. Money problems seem to be a recurring theme with the Netflix heroes.

At Luke’s other job a lot more subplots are touched on. The place is a nightclub called Harlem’s Paradise, owned by Cornell Stokes, AKA Cottonmouth, a nickname he apparently hates. Stokes has some questionable deals going with Councilwoman Mariah Dillard and a local gangster called Domingo Colon. They at least avoid the big stereotype; Cottonmouth isn’t a drug dealer, he’s an arms dealer, selling black market, high-tech weapons from Justin Hammer, Tony Stark’s rival and villain of Iron Man 2. Luke works here as an off the books dishwasher… usually. Tonight he gets drafted to be a bartender when someone calls in sick. Luke ends up meeting and flirting with Misty Knight, a very important character in the Power Man & Iron Fist mythos. Although as events unfold, things are certainly different.

While Stokes, Dillard, and Colon are making their deal, and Luke and Misty are flirting, things take a turn on the streets. Stokes’ weapons deal is interrupted by masked gunmen. The hold up turns into a massacre, committed by Luke’s co-worker Chico, Dante the bartender Luke replaced, and a new character Shameek. Things go badly, there’s a falling out among the thieves, which leads to more gunfire and a call that’s going to have a lot of repercussions.

There’s another scene where Luke ends up briefly coming to the attention of the three bad guys upstairs, and then a lot more of Luke and Misty. A LOT more. Luke has some flashbacks to his time in prison, and Misty comments that he talks in his sleep, mentioning “Shades and Comanche,” two Power Man villains in the comics. Misty lies about what she does as she leaves after getting a call from work.

Work is being a detective for the NYPD, and Misty is investigating the robbery/homicide we saw happen. She works with Rafael Scarfe, another minor character from Power Man & Iron Fist. She knows at least one of the victims, and is working to piece together what happened.

Also trying to figure out what happened, Stokes gets a visit from Shades, who works for a man nicknamed Diamondback. Stokes clearly doesn’t trust him, and there’s a lot of tension. Shades claims he’s there to help, for now. There’s a big build up when Shades takes the sunglasses off… but nothing happens. Stokes’ right hand man clearly doesn’t like Shades.

The next morning, Luke and Pops talk about the killings, which are all over the newspapers and the neighborhood. They both don’t like what’s happening, but don’t think there’s anything they can do it. Luke comments that “Nobody has a father and everybody has a gun,” in this gangster scene. Still trying to keep his head down, Luke lies to Pops about Chico, but he seems uncomfortable with it at least.

Councilwoman Dillard does a public appearance, and we see in one subtle bit with her aide just how two-faced she is. Stokes and Shades drop by, and Dillard is very worried about them being seen together. As a rule, if you don’t want to be seen in public with someone you’re doing something with, it’s time to rethink that decision. We get more background on the stuff Dillard and Cottonmouth are up to, and Cottonmouth posts a bounty on the surviving robbers.

There are a few interlude scenes showing the people looking to take advantage of the reward, Luke with some street folks, and Stokes showing his artistic side. Then we’re back to Luke working in the kitchen of Stokes’ club, and seeing things he doesn’t want to see. Most particularly, he sees Shades come in and flips out. Clearly, they have bad history between them.

Stokes gets his hands on one of the robbers and questions him… enthusiastically. It’s an ugly, messy scene. It shows us a bit about Stokes, Shades, and Tone (Stoke’s lieutenant). It’s a powerful scene, but I think it loses a little bit because it’s very similar to some of the Kingpin scenes in Daredevil. Near the end of it, Stokes sends Tone to get his money, which didn’t quite track for me, because Shameek didn’t really do anything except bleed. I’m not sure how Tone knows where to go here.

Misty and Rafe work Shameek’s death, too. Misty quotes Ben Franklin’s famous line about secrets, and Rafe shows he’s kind of ignorant. What’s really amusing is Rafe telling Misty to talk to the replacement bartender from the night of the robbery (Luke). Misty puts up a fuss but agrees, and I can’t help but feel she’s being sent exactly where she wants to go

The episode ends with Luke trying to go home, and seeing his landlady in trouble. This turns into the fight at the restaurant that was in most of the trailers. It’s a nice action scene, but Luke is a lot harder on the furnishings of the place he’s supposedly protecting than he needs to be. It ends with an offer from Connie Lin that he turns down, but strikes a chord with comic book fans. Luke pulls his hood up and walks off into the night.

What I liked: Colter does a great job as Cage. Mahershala Ali is also impressive as Stokes/Cottonmouth. The changes away from costumes and more colorful identities work for the way the story is being told. The several different plots are going to be interesting to see played out. I guess this is early in Misty Knight’s career, since she’s lacking what she’s best known for in the comics. The fight at the end was nicely done. I like Luke and Pops’ relationship. The sort of joke between Pops and Luke about the events in Jessica Jones was funny. I also love that the Chinese place is called Ghengis Connie’s.

What I didn’t: It seems like they are doing a major change from the comics as far Luke/Misty/Danny Rand (Iron Fist, the next hero to get a series). In an interview I saw with Mike Colter, he stated he was very against the Power Man costume, so I guess we won’t even see it in flashback, which is too bad. And I think maybe they overuse the view of the “Malcolm X Boulevard” sign in the title sequence just a bit.

Overall, I thought this was fantastic. It was a great addition to the Netflix shows and the Marvel Cinematic Universe in general. I’ll give it a 4.5 out of 5 and I’m looking forward to get a chance to watch the rest of the series.