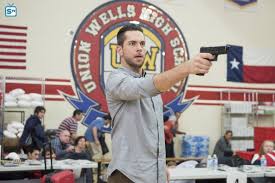 Heroes Reborn races towards its finale in “Company Woman.” It has been announced that this will be a series, not season, finale. I guess the ratings weren’t there to keep things going. Evo powers can’t fix everything.

The massive solar flare is racing towards Earth. Word has gotten out, and people are panicking. Several different groups of Evos are heading to Odessa to try and save the world, in spite of Erica Kravitz’ best efforts. Erica continues to spin the facts and try and keep everything under her control.

Tommy, by Erica’s plan, will be sending people the future in groups. Her machines both enhance his power and let him home in on people wearing special watches. Tommy’s having his doubts about Erica, helped along by both Emily and his mother, who clearly don’t trust her at all. I guess that makes them smarter than he is.

Ren, Katana Girl’s almost-forgotten partner, makes his own way to Gateway. Improbably, his name is on the access list. I guess either Katana Girl or Otomo, her father/creator, must have set it up. Otomo doesn’t seem to quite know which side he’s on.

The group of Luke, Malina, Phoebe, and Quentin continue their road trip, which isn’t going well. Phoebe is unrepentantly on Erica’s side, and is constantly snarky to everyone else. Why you’d let someone with her attitude, incredibly dangerous powers, and record of killing people live I don’t know.

Parkman gets to Odessa ahead of everyone, since he ducked out early. He’s still holding Taylor captive with his powers. He threatens Erica to get what he wants- those teleport watches for him, his wife, and son. Erica finally agrees, and Parkman runs off.

A good bit of this episode is Erica’s back story, which we get in a series of flashbacks. I will say that she did have some really bad experiences with an Evo early in life, but that still doesn’t excuse what she’d been doing. Her life took some really dark turns long before she became the head of Renautas. As an aside, I’m still hoping they explain where that name came from before this all ends.

Tommy overhears Richard the computer geek talking to Otomo, and realizes Erica is even worse than he thought. He ports away, leaving Richard to tell Erica her pet teleporter is loose. At least she doesn’t go Bond villain and kill people for telling her bad news. She does get a surprise when she pushes Taylor, and gets a demonstration of Evo power from an unexpected source.

Luke gives serious thought to killing Phoebe, but it doesn’t work out for various reasons. He missed a great opportunity there, in my opinion. Quentin seems to be reverting to his pre-reset mode of being a good guy again, which is some odd characterization choice. He was so devoted to Erica’s cause when Noah first got back from the past.

Ren ends up bumping in to Emily. They chat for a while before realizing they have some common interests and goals. Ren starts recognizing parts of the complex from EverNow. They both go looking for “The Master of Time and Space.” I think Ren is looking for Hiro and Emily is looking for Tommy, but since they share powers, it’s understandable.

Tommy himself saves his mother from Erica’s guards. They talk about the dangers of using the time travel aspects of his powers. He’s desperate to find Malina so they can live up to their destiny and save the world. Tommy finally goes off to look for Malina.

Speaking of, Malina’s group goes to Claire’s old high school. There’s even a picture of her in the display case, which seems odd to me. If there’s so much anti-Evo prejudice, and Claire is the one that first revealed Evos to the world, why would they have a picture of her up in the school display case? At any rate, Malina does something to try and draw Tommy to her.

There ends up being a huge confrontation at the high school, including Malina’s group, Farrah’s group, some Erica guards led by Otomo and Joanne, Luke’s Evo-killing ex. A lot happens there, including people being shot, the end of at least one cast member, and a serious blow to the heroes’ side of things. Elsewhere, Parkman has a very bad day. Everything is racing towards the big finale.

What I liked: The end of the Erica flashbacks showed a very yong Casper (the Penny Man). I liked that character. One character I couldn’t stand gets dealt with this episode. I’m glad that the various characters are finally meeting up.

What I didn’t: Honestly, I don’t care about Erica’s history. She went through something horrible, but she let it make her into an evil wench. Quentin’s switching sides was really odd. Otomo also seems to be a bit wishy-washy.

I’ll give this one a very low 3 out of 5. I just really didn’t care about Erica’s “Why I became a villain/racist” story. I guess we’ll see how it all wraps up next episode.