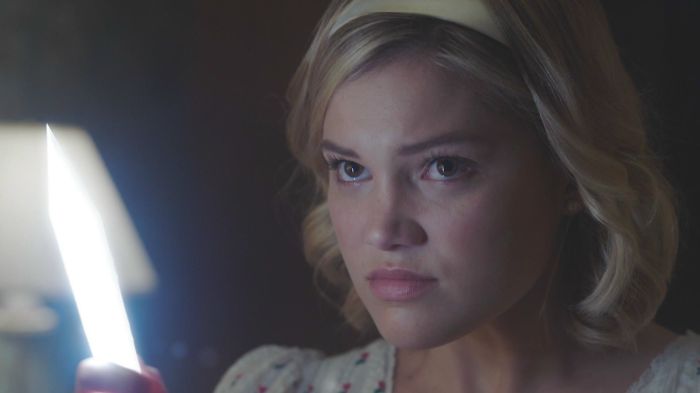 You wanna say that again?

Things are taking a turn for the metaphysical on Cloak and Dagger. With the reveal last episode that not only is Andre not the good guy he seemed to be, but he has powers, also tied to the infamous Roxxon rig explosion, we finally see who our big bad is for the season. Now, we see what that means, and see how both Tandy and Tyrone are going to deal with it. A lot of characters don’t have a great episode, but we do find out what happened to someone I’ve been wondering about for a while now.

The show opens with Andre demonstrating his skill with the trumpet, and Tandy being a literal captive audience. Elsewhere, Bridget and Tyrone follow up on Tandy’s raid at the grow house. Initially, they thought Mayhem was behind the raid, but Tyrone found enough evidence to show it was Tandy, who they are both now worried about. Tyrone ‘ports away from Bridget’s attempts at reassurance. Tandy wakes up and she and Andre argue about what she went through last time, with the Many Lives of Tandy going through her head. Andre is annoyingly smug and I really hope he gets what’s coming to him soon. Andre justifies himself and splits hairs about how he does it, and then Lia shows up with a really big thug. Tandy also gets a reminder of what she gave up in those other lives, and how it’s affecting her now.

Adina Johnson is dealing with her new “houseguest” and trying to figure out what she’s going to do with the captive (ex?) Detective Connors. She’s very calm as she goes about some kitchen tasks and tells him, flatly, what she’s trying to decide. I don’t blame her. The man made his own problems here. Lia walks Tandy through what’s expected of her, and this place really is kind of like a cult. They’re doing everything they can to break down everyone’s spirits, but I suspect they’re not going to find that so easy with Tandy. Lia really is a bleak, bitter little person.

Tyrone is showing some promise as an investigator on his own as he goes to some of the places he knows Tandy has been lately. At the counseling center, he meets up with Andre, who starts playing head-games with Tyrone from the start. Tyrone uses his own vision power and somehow gets somewhat tuned in on Andre’s weird record shop. Andre is doing everything he can to drive a wedge between our heroes, and get Tyrone to give up. Tandy asks Del, one of the captive girls, some questions about the place, and gets an idea about how conditioned the girls have been. Connors gives some very honest answers to Adina’s questions, and she doesn’t know what to make of what she’s hearing. The additional interrogation gets interrupted when Otis bangs on the door and is taken aback by the scene he walks in on.

Andre’s rifling through Tyrone’s memories leads him to Chantelle, Evita’s aunt and talented voodoun. He tries to come on all innocent and earnest, but Chantelle is too wise for him. As he tries to use his powers and goes back to the record shop vision/focus technique, we see he’s not alone there. Tandy makes a break for freedom which goes awry thanks to Lia’s hulking thug and an unexpected betrayal. She gets an odd punishment that helps show how Lia and Andre are keeping this operation running. Adina and Otis argue, which provides Connors a distraction he needs, but doesn’t quite go how he hoped.

Tyrone recovers from Andre’s psy-ops on him earlier, with some unexpected and unusual help. Tandy suffers through the after-effects of her punishment and another warped lecture from Lia. Tyrone’s unexpected guardian angel keeps helping him, and Tyrone gets more resolve and another clue. Andre keeps trying to scam Chantelle, and gets a crash course on loa and ascension. He also gets a surprise when he sees what the guardian angel has done to his record collection, and another when Chantelle shows she can follow him there.

Tyrone is following up on some of his old training, and uses the technique Evita taught him a little while back to focus on his target, giving one of the crooked ambulance drivers a nasty shock and a really bad day. Tandy has a disturbing scene with Del, showing how cowed Del is and how out of it Tandy is now. Even this far off her game, unable to act on her own, Tandy urges Del to make a run for it. She has her faults, but Tandy is most definitely a hero at this point.

Chantelle and Andre have a lesson/showdown over veve, loa, and knowledge. Chantelle, too, is a hero in my book. I really admire what she did, and her calm courage as she did it. Tyrone’s guardian angel watches all this but doesn’t act. Adina wrestles with her conscience and the conflicting desires for justice and revenge. Connors has been remarkably honest and forthright in all this, and only asked to go to the bathroom for compensation. Adina has a mini-breakdown, ranting against the system, and it really comes across as touching, not preachy. Something the writers over on Supergirl could really learn from. Connors finally tells her something she’s wanted to know. What I’m curious about is her getting out plates at the end of this. Is she inviting people over for the meal she made? Going to share dinner with Connors?

There’s an ending in the record shop that doesn’t look good for someone I really like. Tandy is drugged into docility while the other girls get ready for their evening. This is where Lia and Andre are making their money, and is horrific and brutal with absolutely no violence actually shown. It’s a well done scene, and the entire set up is believable. Tandy finally gets through to Del, at least enough for her to take some action on her own behalf while Hulk junior is distracted by a misadventure with a vending machine. Del has a revelation, and gets her fighting spirit back. She argues with Lia, who tries to verbally beat her down again. Their argument sets off a needed spark in Tandy, who is saved at the last minute from something terrible and disturbing.

Reinvigorated, Tandy goes on a butt-kicking rampage, showing these low-life criminals what they’re dealing with. This is the same time Tyrone has followed his own clues to get to the Viking motel, and launch his own assault. Tyrone is a better fighter than I thought, and uses his powers in some really creative ways in this battle. Tandy gets some payback on Lia, and our two heroes meet up again. Things are looking great until Tyrone has some kind of weird reaction and things end not looking great for him.

What I liked: What Lia and company are up to is disturbing, twisted, and evil, but it’s very believable and needs to get exposed and talked about more. I’m glad the show is doing this. The Chantelle/Andre scenes were really interesting, and the mystic aspects of our heroes’ powers makes sense, especially with the show being in New Orleans. The big fight at the end was great, and I like the new spin in Tyrone’s powers. The unexpected guardian angel was a clever spin on things, and the imagery in Andre’s record store is unique and works really well. Adina’s scenes with Connors also work well for me, and I get where she’s coming from.

What I didn’t: Andre is too smug and too many things are breaking his way. I really want to see him get what he deserves. I don’t like what seems to have happened in his Crossroads/Devil Went Down to Georgia showdown with Chantelle. It doesn’t hugely matter, I suppose, but I’m still unclear on whether or not Lia knows about the supernatural aspects of what Andre’s doing, and I really want to know.

I thought this was another great episode that dealt with several potentially touchy subjects. I’ll give it a high 3.5 out of 5.