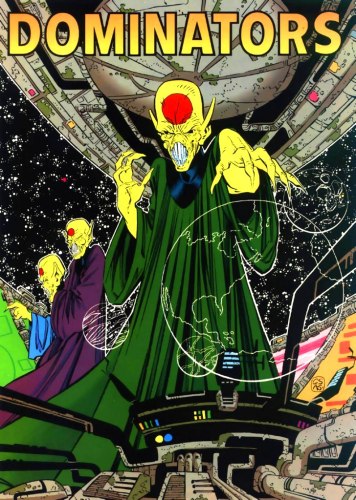 As they are in the comics…

With the big CW crossover coming up, there’s a new group of bad guys on the radar. The aliens the gathered heroes will be fighting are called Dominators, collectively known as the Dominion. They are one of DC Comics’ many alien races. In the comics they have yellow skin, pointed ears, vicious looking teeth and fingernails that look more like claws. They don’t have individual names, all serving the Dominion. Their place within their caste is marked by the size of the red dot on their forehead. The bigger the dot, the more important they are.

Their interest in Earth usually revolves around the “meta-gene,” that special thing that lets Earthlings survive accidents that should kill them and gain powers (Flash and Firestorm to use examples from the shows). The Dominion in the comics feared that the meta-gene would make Earth far too powerful. That fact that it was also home to powerful aliens (Superman, Martian Manhunter) and practioners of magic (Spectre, Dr. Fate, Phantom Stranger, Constantine), made Earth even more dangerous. During the Invasion! event in 1989, the Dominion got many alien races to get together and invade the Earth.

The “Heroes vs Aliens” crossover will bring together Supergirl, Flash, Arrow, and the Legends of Tomorrow, with at least some of their respective supporting casts. In trailers, Flash has called the Dominators “like World War Z zombies,” which isn’t that close to their comic book incarnation. Interestingly, we’re also shown Deathstroke in the trailer, who hasn’t been around for a while. In the comics, Deathstroke was mostly a New Teen Titans villain.

The Dominators being worried about the meta-gene makes a lot more sense in the comics. By 1989, there had been three generations of heroes (and villains) and there were a lot of people running around with powers. In the trailer, they mention taking out Earth “before it becomes the scourge of our world,” but whether that means supers or humans in general I’m not sure. I do know the Dominators are nasty villains and this should be a really impressive event.

…and as they are in the crossover.