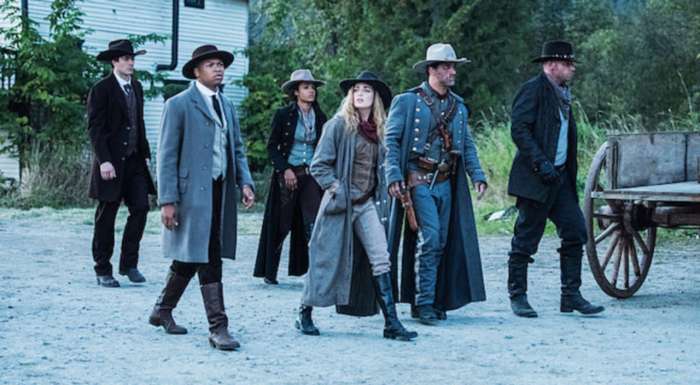 The Legends in the Old…wait, didn’t we do this already?

This week, the Legends go to “Outlaw Country,” as they return to the Old West and meet up with Jonah Hex yet again. Their visit to see him last time was one of the highlights of season one. This time, things go a bit differently, after Martin Stein takes his turn again with the opening narration. I’d really like to hear Mick Rory’s version of it. He’d either change the words or say something like, “This is stupid,” halfway through and stop.

The show opens with what is presumably another of these time pirates in the Old West. He’s tracking something with a device that is clearly from some point in the future. Unfortunately for him, he runs into Hex’s major enemy, Quentin Turnbull. Turnbull is just as fair and reasonable as he always is. Needless to say, the pirate ends up dead and Turnbull gains his gadget and just enough knowledge about what the pirate was up to to be dangerous.

Where are all these time pirates coming from? Is time travel technology that commonly available somewhere? Or is someone tossing distractions at the Legends? I’d like to think it’s the second, but I’m not convinced. I guess we’ll see eventually.

Points to the team for trying to follow up. They are working on figuring out what the amulet is they stole from Damian Darhk. The talk ranges from time travel to speedsters, and Mick gets predictably bored. Jax and Martin duck out to have their own debate about Barry Allen’s secret message from the future. After Jax leaves, Martin gets the first of several wicked headaches throughout the episode.

Nate is working hard in the library, and sick of it. He’s been cooped up in one most of his life, is off having adventures, even got superpowers… and still can’t get out from behind the books. His device, which Ray nicknamed the Troubalert, goes off. The Troublalert was the name of the device that sent the SuperFriends off on most of their missions in the classic cartoon. I guess the CW writers are having some serious nostalgia, as it’s the second reference to that show this week (Olsen and Winn called themselves the SuperFriends on Monday’s Supergirl).

The team finds a new problem back in the Old West, and gets ready to deal with it. During this, Ray sees a sketch Nate did of a costume for himself. Apparently, Ray using the cold gun has already been forgotten, since it’s never mentioned again. The Legends collectively have a bad memory. Then again, their memories change time to time, as Stein complains is happening to him. This both sets up a new subplot and provides this week’s excuse for having the team’s most powerful member, Firestorm, out of the action. Nuclear blasts vs cowboys wouldn’t be much of a fight, after all.

Leaving Stein behind, the team ventures off into the countryside, and runs across some people trying to lynch Jonah Hex for reasons we never find out. Nate wades in, spouting horrible Western cliches, and then uses his power to save himself when the bad guys start trying to shoot him. Weirdly, he catches bullets in his hands and even teeth, suggesting he has superhuman reflexes in addition to the steel skin. Hex, seeing the rest of the team, is clearly overjoyed, as you can tell by his, “Oh, hell, they’re back.”

Regrouping back on the ship, the team works out Turnbull is behind the current time aberration. They also comment that Sara is “into fillies.” Now, BEFORE I get nasty comments, let me say why this bothers me. They strongly imply she’s lesbian. Yes, I know, not news, but considering her past with Oliver Queen, I had thought she was bi. Of the LBGT community, writers seem to be afraid of Bi characters the most. A little representation, guys? I know bi people. They exist.

The team splits up. They turn Mick loose to cause problems in the saloon Turnbull owns to lure him out, while Nate, Ray, and Jax get sent off to look at his office posing as tax collectors. Poor Nate, more bookwork. They manage to find out that Turnbull is trying to make his own country, and is stockpiling some new and unique ore he found. They go to Turnbull’s mine after a short fight, and find out the ore is… dwarf star alloy. The same stuff Ray used to power his ATOM suit. Now, personally, I don’t get how you make an alloy out of a star, since they’re balls of flaming gas, but hey, comic book logic.

To the team’s vast annoyance, Mick and Turnbull end up getting along. Impatient Jonah Hex bursts in to the saloon to try and get to Turnbull himself. Not only is he vastly outgunned, but Turnbull has made bullets of the magic dwarf star metal, and things hit with them sort of implode in this weird black smoke effect. Everyone one holding their guns on Hex somehow turns into a saloon brawl then the Legends come in to back up Hex. I guess the thugs forgot they had guns? Steel/Nate tries to cover Rory when he almost gets shot by one of the magic bullets, but it manages to penetrate his steel skin. Hey, at least he doesn’t vaporize.

Back on the ship, Nate’s condition goes from “near death” to “up and walking around just fine” with seemingly no transition. Hex shares a sort of origin story for him and his feud with Turnbull with Sara. Hex also asked earlier what happened to Rip, so at least someone remembers he’s supposed to be part of the crew. Elsewhere, Jax and Stein talk about headaches and visions of alternate lives, while Amaya and Rory discuss keeping his inner animal in control. ‘Cuz she has animal powers. Get it?

Their plan, such as it is, is to prevent Turnbull from sealing off a pass that somehow would give him control of most of the Western United States. Steel gets to go play “more powerful than a locomotive,” which looks cool and all, but I can think of several more effective ways he could have done that. Sara, Rory, Hex, and Amaya go to shut down the mine, which involves a lot of fighting and another weird scene between Rory and Amaya. They end up keeping the dwarf star alloy, which makes Ray happy because he can use it to build a new suit.

Now, let’s review that a moment. Ray said earlier he used the dwarf star alloy to POWER his suit, and just a finger-sized piece. Now they have boxes of it. First off, all that was stopping him before was a power source? Secondly, with that much more power, is his suit going to be more impressive?

After a bunch of wrap up scenes, which include Hex and Sara saying goodbye, and Stein wondering how much his life has changed, we see Ray actually made Steel a suit like his sketch earlier. Sara tells everyone their friends in 2016 need them, which I guess is an allusion to the big crossover coming up.

What I liked: I’ve always liked Westerns, and Hex in particular. So it was good to see him again. I’m also glad they at least mentioned their missing leader Rip. Rory and Turnbull liking each other was an unexpected twist that actually worked. And it sounds like Ray is getting his suit back.

What I didn’t: The team is well past the point where “bunch of bad guys” should be challenging them. Many of them have powers, and this is getting increasingly unbelievable. I’m also tired of “how can we keep Firestorm out of the fight” this week. It’s getting old. I mentioned the dwarf star issues above. Why didn’t Nate vaporize, like everything else hit with a magic bullet? Where’s the cold gun (you can’t tell me that Ray couldn’t put it back together again)?

I hate saying it, but this show keeps going downhill fast. I’m giving this one a 2 out of 5. I hope the crossover is at least good in two weeks.