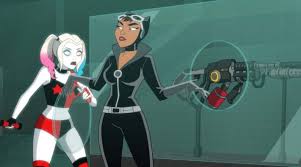 and this week’s special guest star…

The new status quo in Gotham continues to look ugly, and Harley is bound and determined to make it worse. She’s made her list, checked it twice, and now is going up against the ice. Specifically, she wants to break into Mr. Freeze’s territory to continue her hit parade. We meet another Bat-character we haven’t seen before on the show, see some relationship developments, and get the usual chaos and humor in “Trapped.”

Harley and her crew are battering at the icy walls of Freeze’s territory, but they’re getting nowhere. Fortunately, in usual Gotham tradition, Freeze employs idiots, and they let slip exactly what’s needed to get in, kicking of another scavenger hunt of insanity. Getting a lift to an unlikely spot, Harley is bored, maybe even sickened, by the chatter between Ivy and her boyfriend, Kite Man. Finally getting where they need to be, the clown and the plant find out things aren’t going to be remotely as easy as their overconfidence suggested. Ivy’s attempts at de-escalation work, barely, and they at least manage to get out intact. Kicking off this week’s subplot of making Dr. Psycho look like an idiot, an ongoing theme, the psionic villain has some trouble with Riddler, their prisoner and power source. It doesn’t go well.

If you want something stolen in Gotham, there’s really only one person who is going to be your A-list choice. Harley is very excited to be meeting Catwoman, but Ivy is a lot less so, and tells a story about some of their past issues. Catwoman makes an impressive entrance, and we see a side of Ivy we’ve never seen before. After a few bumps in the road, Catwoman agrees to help, mostly because she has her eye on something else. Later, Harley, Ivy, and Kite-Man meet the feline felon on a rooftop, the heist is on, and yet another subplot emerges. Harley is not happy about the newest development. Catwoman launches into some very passive-aggressive chat with Ivy about her recent choices, while Harley and Kite Man go after something else, and see a few familiar trophies along the way. Kite Man isn’t the most effective thief, but he’s determined, and actually wins some grudging respect from Harley.

While Psycho leads the team on more hijinks that feel like filler, the heist crew deal with a truly impressive array of traps. Finally, they find what they’ve come for, and all’s well, right? Well, not so much. There’s a final big booby trap, a completely predictable betrayal, and an important, if ill-timed, question. We also learn one of the character’s middle name, which seems unlikely. Back at the mall/headquarters, thigs continue to go poorly for Psycho and the others.

As Harley comedically and ineffectively flails away at things, Ivy and Kite Man have a talk that’s painful to see. Ivy also directs some deserved ire at Harley for her ongoing obsessions leading them into constant danger. They finally win free, and Harley isn’t having any of the expected conclusion to this particular adventure. Harley gets back to the mall, and King Shark catches her up on what happened while she was out. There’s also a very interesting perspective on Ridder’s captivity from Ridder himself. Not that it’s really the show’s style to follow through on detail, but I’m really curious about what’s happening to his University with him not there to keep things running.

The wrap up scenes are both kind of sweet, especially for this show, and within certain parameters. Ivy takes care of some neglected business, and Harley goes to check on her. They do some more bonding, and Harley makes a surprising admission/concession. Later, Ivy goes to follow up on something from earlier, and ends the show on a really interesting note that could change the status quo, depending on what happens next.

What I liked: I pretty much always enjoy Catwoman, and this was a decent interpretation of the character. The idiotic henchmen at the beginning were a bit much, but they fit with the general tone of the show. Their little quest to get the things they needed was entertaining. Kite Man actually impressed me a bit instead of just being a complication and/or plot device. There was even a nod to the 60’s show.

What I didn’t: Again, the B plot with Psycho and the others didn’t really accomplish anything, and wasn’t even that funny. They introduced Barbara last time, and I was hoping for more of her. I know it’s a villain, not hero, show but I’d like to see what’s up with the recovering Batman, the unchaperoned Robin, and the missing Justice League.

It was entertaining silliness, which they do fairly well. I’ll give it a solid 3.5 out of 5.

This site uses Akismet to reduce spam. Learn how your comment data is processed.