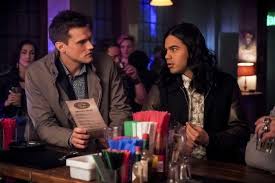 I guess I was wrong. I don’t see Cicada on the menu after all.

“Memorabilia” was a well-chosen title for Flash’s 12th episode of the season. We finally got to see the Flash Museum, there were a bunch of nice little Easter Eggs here and there, and we got to see the team trying to be proactive with their Cicada problem. Of course, nothing went quite as planned, but when does it? It was an episode that also made me wonder if they coordinate themes sometimes, considering Black Lighting also had none of their heroes in costume this week, just like this episode.

The episode opens with Nora in the Time Vault, recording another transmission for Eobard Thawne, in his prison cell in the future. She’s feeling the weight of keeping secrets from her family, and finally sends the message off with the help of Gideon (voiced by an uncredited Morena Baccarin, of Gotham/Deadpool/Firefly fame). I guess they need to distinguish between Amy Pemberton’s Gideon over on Legends of Tomorrow.

Next up is a fun outing to a local skating rink. The rink is identified on a banner in the background as “Bannin Family Ice.” Brek Bannin, in the comics, is Polar Boy, teammate to XS in the Legion of Superheroes. The West-Allens have some fun, and we learn that Nora can’t skate. Caitlin glides by wearing a sweater that’s a nod to Killer Frost’s DC Bombshells look, and we learn more about Ralph’s odd childhood. Ralph also mentions an office opened up in his building, and Iris thinks about turning her blog into an actual newspaper. Wells rambles on a bit about his home Earth, then gets a message that a package has come and they need to get back to STAR.

The delivery is down in the Cortex, because as we all know by now, STAR has no security at all. Wells unveils a Memory Machine, which he hopes to use in their plan to wake Gracie up out of her coma and hopefully quench Orlan/Cicada’s anti-meta rage. That’s a very optimistic plan that I could see Barry going for and Oliver rolling his eyes at. In an impressive bit of babbling, Wells manages to mention the Summerholt Institute (which was a part of Smallville, way back before the Arrow-verse) and the Mad Hatter, one of Batman’s foes. There’s also a passing reference to an interdimensional delivery service.  We also hear about Wells’ former partner with a familiar name, and some side effects of the device which spook Nora. Caitlin goes home to bed, worn out after Killer Frost’s all-night movie binge the night before. Ralph talks Cisco, finally back from his obsessive work on the “cure,” into helping him with a confidential informant. Having everything lined up, they decide they’ll try with Gracie tomorrow. I always wonder about this kind of thing. “Hey, there’s a villain out there who kills people a lot. We have a lead on how to stop him, but it’s bed time.”

Nora brings a portable version of Gideon with her to try and hack the Memory Machine. Gideon tells her that won’t work, and they get an alert that Wells has done the first step in making the machine work. Nora brilliantly decides to go in alone, despite the warnings about going in pairs from Wells, and finds Gracie in a washed out, black and white version of the CCPD, with some cameos from Captain Singh and Officer Jones. Shockingly her shortcut idea doesn’t work, and Nora finds herself trapped with this version of Gracie, who talks about her Uncle Orlan in glowing terms.

Iris is on the phone with a lawyer and gets some news that disturbs her a bit. Barry tries to find out what’s going on, but they get the call to get back to STAR, where Nora’s foolishness has become known. After some debate, they decide to send Barry and Iris in after Nora. Ralph and Cisco’s mission doesn’t quite go to plan, either. Because nothing is going right tonight, Barry and Iris don’t end up in Gracie’s memories, but in Nora’s. They find that in her future, STAR Labs is what eventually becomes the Flash Museum, which I suppose is fitting enough. Barry loves seeing all the Flash memorabilia, and he and Iris banter a bit. Among the neat things in the background are various DC Comics, including one with Flash and Cicada, all sorts of toys that DC actually sells, and a few they don’t. Nora ends up puzzled as Orlan and Gracie have some great family time around breakfast.

Cisco finally figures out why Ralph brought him to this bar, and is annoyed. He also ends up being a bit wrong. Barry is annoyed that the villains get their own wing, which is where they find young Nora. In the Flash Museum, Captain Singh gets interviewed about how Cicada is a bad mark on Flash’s legacy, and the serial killer claims 152 victims. The exhibit is narrated by Dexter Myles, who is the Flash Museum curator in the comics. Nora tries to appeal to Gracie for help, but finds out that Gracie has heard some things in her coma, is very smart, and more than willing to follow in her uncle’s footsteps. Nora also gets another hint about how to find Cicada, but I think she missed it in the chaos.

Barry and Iris watch a nasty confrontation between young Nora and future Iris. Iris is shaken, and Barry does his best to reassure her that it’s not as bad as it looks. We find out some of why Iris was hesitating on the phone earlier with the lawyer. As they go off to look for their way out, one of the exhibits takes an interest, and while it’s a fairly simple effect, it’s really, really creepy. Ralph and Cisco have a mild argument and Ralph corrects a few of Cisco’s mistaken ideas. Cisco ends up getting a nice surprise for once, which Ralph sees and smiles about. As Nora in one mind and Barry and Iris in another confront menacing guardians, Caitlin and Wells realize they’re all in trouble. There’s a sort of teleconference that works in the Flash theme song as everyone gets brought up to date on what’s going on.

Nora battles her foe, and Barry and Iris deal with theirs. They see a better version of Nora’s past/Iris’ future. Gracie gets a glimpse of reality and rejects it utterly. Nora deals with a nasty surprise from the future before she manages to link up with Barry and Iris and escape.

Back at STAR, Caitlin gives everyone a clean bill of health. She has also figured out that Gracie’s condition is more complicated than they thought. Nora comes up with a clue from her time in Gracie’s head, and gives it to the team. Wells makes some dark hints, but then lets Nora off the hook. As the others leave, Wells gets a bit of information from Barry. Iris goes to her new office, and gets a surprise party from her family. Nora even shows that the future has been at least slightly changed already. Nora and Iris have a touching moment together.

Nora sends another message to the future, her resolve back in place. We see the effect all of this has had on Gracie, and it’s not good. Team Flash goes back to the skate rink, where Cisco gets a welcome message and says he’s made progress on the “cure.” Barry then goes ahead and decides something that I’ve been worried about since this cure idea first popped up.

What I liked: There were a lot of nice touches in this episode. I loved Caitlin’s sweater, and I’m amused that Wells worked Smallville and Batman references into the same bit of babble. While I don’t like what happened with Gracie, it was well done with some surprises I never saw coming. The team didn’t get anywhere this episode, but they tried real hard. The bar with Ralph and Cisco was fun, and Cisco is overdue for a break. The “attacker” going after Barry and Iris was really nicely rendered and creepy as hell. I like that they used the fact that people’s memories are colored by emotion and not always reliable.

What I didn’t: They just can’t seem to get anywhere with going after Cicada. I don’t get what kind of game Wells is playing, but there are too many secrets floating around STAR. It was a bit odd that with memories and brain issues involved, they ignored the telepath/empath they know. I don’t see why Nora has such faith in Thawne. If she’s working this hard to keep things secret, she has to know on some level this is a bad idea, just like Diggle with Diaz over on Arrow.

It was a decent episode. I’ll give it a high 3 out of 5. I hope they manage some actual progress next time.