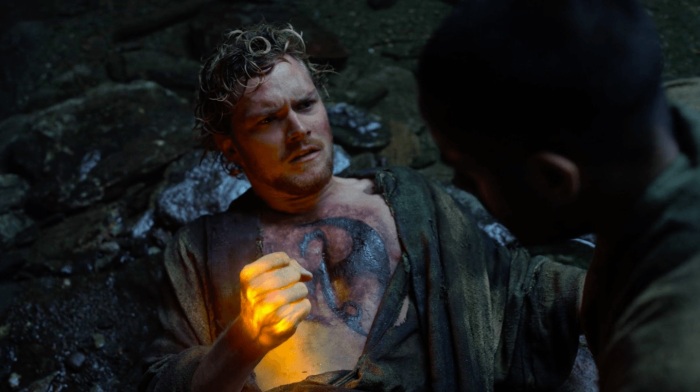 Danny has a bad morning after…

This is another review that has spoilers in it, so be warned: there are spoilers below.

The 11th episode of Iron Fist, “Lead Horse Back To Stable,” begins with a flashback to a very significant event in Danny’s life. Davos finds Danny just outside a cave, sprawled on the rocks there. Davos sees through the rips in Danny’s robes that he has a very fresh brand across his chest- the symbol of Shao Lao the Undying. When Davos touches him, Danny starts up and instinctively triggers the Iron Fist, surprising both of them. Davos and Danny limp away from the cave, both commenting on the power not being what they thought it was.

In the present, Danny tends his wounds from the battle with Bakuto’s section of The Hand. He gets a series of flashbacks from recent events (I really think the boy has PTSD) and tries, and fails, to get the Fist working again. Leaving the mens’ room, Danny meets up with Davos, and they talk about what to do next. Danny asks Davos how he managed to track him down, and Davos admits that the Internet can be useful. Davos pushes for them to return to K’un-Lun and lays on a heavy guilt trip, while Danny says he wants to stay. He makes the decent point that, if the Iron Fist is supposed to destroy The Hand, and The Hand is here in New York, this is where he needs to be. Davos reluctantly agrees, if Danny will return to K’un-Lun afterward. Danny agrees and says he knows someplace to get his wound tended to.

Colleen returns to her Chikara Dojo, surveying the wreckage from the big fight there. I’m still wondering who that was assaulting our heroes. The Hand uses traditional martial arts weapons and dress. So far, I don’t know that we’ve seen a faction in this story that uses modern weapons and tactical gear. That to one side, Bakuto drops in, and he and Colleen have an argument about her level of respect and what to do about Danny Rand. He reminds her that his group gets kids off the street and into good jobs like hospitals and government interns. Bakuto leans heavily on Colleen, insisting on her compliance.

To no surprise at all, Danny headed out to see Claire, interrupting her studies of various Eastern Philosophies. This is part of why I like Claire so much. She doesn’t just see these heroes and their powers, she works hard to understand them. I’m not sure we’ve seen another character in the Marvel Cinematic Universe do that, aside from maybe Simmons on Agents of SHIELD. After some initial confusion, Claire agrees to help. That confusion doesn’t clear up any after she digs an arrowhead out of Danny’s side. Her treatment is simple and effective, if a bit painful. Claire asks if he can’t just heal himself with the Fist, and he says he can’t right now. Davos is surprised she knows about the Fist.

Danny persuades Davos to give them some privacy, and then gives Claire some bad news. Not only does he tell her about The Hand building an army right here in New York, but that Colleen is part of it. Claire is stunned, and Danny gets loud about it. They talk about broken hearts and antibiotics, and even use a simple shirt to tie-in with Luke Cage.

Harold is working out on the heavy bag in his penthouse. When he decides he’s had enough, he goes to the work station where Joy is typing away on the computer. It’s not like Kyle is going to be using it anymore. Joy has found out what Bakuto is doing with Gao’s money, and manages figure out how to control it. Harold is thrilled and goes on about using this to bring down The Hand. Joy is clearly a lot less certain about this. She’s also worried about Ward, which Harold dismisses.

Claire and Davos talk while Danny is up on the roof doing forms. It could be seen as an info-dump, but it ends up being a really entertaining contrast of their two worlds. I think my favorite part was Claire saying dragons don’t exist, and Davos, completely serious, asking her, “Why would you think that?” They also talk about Danny’s duty, where the Iron Fist comes from, emotional repression, and pizza. You know, the important stuff. When the bell rings, Claire insists on going down to get the pizza herself.

I was expecting this to be some kind of trap, and was all set to be annoyed with Claire. Instead, the pizza guy has been replaced by Colleen, who wants to talk to Danny. First, she has to get by Claire, who is very disappointed to learn that what Danny told her is true. With her usual sass, Claire suggests that, if Colleen’s Hand is supposed to be so different from the other part, they need a different name, and makes a few suggestions.

Apparently Colleen persuaded Claire, because the next scene is Danny on the roof, his moves being hampered by his injury. He has more flashbacks, this time to the boredom of guarding the pass to K’un Lun. Colleen joins him on the roof and they argue some more. There’s a passing mention of the need for antibiotics, and Danny pretty much refuses to listen to, or trust, Colleen. I can’t say I blame him at this point. Catching your lover in a lie is painful, and it’s worse when the lie is about an evil organization.

Davos very suspiciously sniffs the pizza that Colleen delivered, and finally allows that it’s not horrible. Claire is not pleased by someone dissing New York pizza. The food comedy gets interrupted when Danny comes back down to talk to Claire. Davos doesn’t quite, but almost, rolls his eyes and goes on “guard duty” again to give them some privacy. Danny shares his plans with Claire and then asks to borrow her car. Considering her history with heroes and her cars, I’m amazed she said yes.

Colleen really is trying to make things right between her and Danny. She goes to one of her former students, Becca. Becca is now working in a hospital, and Colleen hits her up for some of the antibiotics that Danny needs. Becca says of course, The Hand always comes first. Colleen really should have listened to that.

Danny and Davos go to the penthouse, meeting up with Harold and Joy. Davos once again has to explain that not everyone from K’un-Lun has the Iron Fist, which is painful as he thought that was his birthright. I’m not clear on how Harold knew Davos was in the elevator. We never see Harold look at the monitors. Maybe his resurrection comes with increased senses? They go over their somewhat simple plan to lure Bakuto out of his compound. I can actually see this working, barring complications. Which, of course, occur. Joy also isn’t happy about the direction the conversation takes in terms of what to do with Bakuto.

Colleen gets a nasty surprise about loyalty within The Hand. Bakuto has a long reach, and Colleen herself drilled obedience into her students’ heads. A group shows up to take Colleen in, and she’s not at all happy about this development. Still think you chose the ride side, Colleen?

In the penthouse, Harold is taking a few extra precautions. Joy isn’t sure this is a good idea, and tries to point out some flaws in the idea. Harold is still having rage issues, and flares up again for a moment. He’s also more than willing to play Joy off against the still-missing (to her) Ward. Harold’s a real prize. I’m not surprised Ward is as screwed up as he is, I’m astonished Joy isn’t.

Colleen is under some heavy security, and firing off a lot of questions. The people holding her are short on answers and long on scorn and mockery. Bakuto drops by, just to remove any doubt that all of this is at his order, and leaves again. Colleen gets taken to a very sinister-looking room, and decides she’s seen enough. Colleen manages to get loose and have the only action sequence in the episode. While her former students are good, she is much better, and manages to get free.

Outside, we learn that even martial arts masters aren’t immune to the boredom of stakeouts. Davos and Danny talk about their shared history in K’un-Lun. Davos listens to Danny’s’ problems, and essentially gives him an “I told you so.” Danny talks about his decision to leave and the sign he followed, which doesn’t impress Davos at all. Then, they see someone fleeing the compound, and the plan goes off the rails. Danny chases after Colleen, and, after a violent confrontation, they more or less patch things up. Davos doesn’t look happy about this, and walks off into the suddenly occurring thunderstorm.

What I liked: I really don’t like Ward, so his absence from an entire episode was fine with me. I always enjoy Claire’s appearances, and she was her usual steadying, helpful presence. Davos’ reaction to pizza was entertaining. Colleen’s escape and fight made sense and worked within the story. There were no business meetings for once.

What I didn’t: Danny’s loss of the Fist doesn’t make a lot of sense to me, and I’m hoping they don’t drag this out for the rest of the season. For a kung-fu themed show, there was a notable lack of action. Harold and Bakuto are both annoyingly smug in different ways, and I wouldn’t mind seeing them both die by the end of the season. I’m wondering why no one seems to be curious about the guys in the tac gear were.

I’ll give this one a 3 out of 5. I’m curious to see how they wrap all this up in just two more episodes.