Happy Friday!  Comic Book Classics Revisited is comin’ at you with part two of our look at the milestone The Death of Superman story.  This part takes place in Justice League America #69 as the heroes come to save those the monster Doomsday has put into peril and fight the creature in an attempt to stop it from causing more damage and harm… Unsuccessfully.  Our first part started the story on a bit of an innocent note with Superman doing what Superman does best – saving Metropolis from a monster invasion and smiling all the way.  It’s a good chance to see the man of steel as we like to think of him – heroic through and through and a bastion of what we can all hope to aspire to.  By story’s end, he will have to sacrifice all to save his adopted home.  But I’m jumping ahead of myself.  Let’s get into the second part of this epic story!

The Justice League arrive on the scene of a massive blaze caused by Doomsday.  Batman works to get the civilians to safety while Green Lantern uses his ring to create a fire truck with water (somehow), Flash runs around real fast to try to create a vacuum to suck out the air feeding the inferno, Wonder Woman tosses some trucks carrying milk into the flames, and Aquaman summons tidal waves to put the fires out.  Wait…  What’s that?  Guy Gardner?  Blue Beetle?  Ice?!?  Who?  Bloodwynd?!  Oh, god, Booster Gold?!?  What kind of Justice League is this?  Yeah, it’s the JLA of the 90s, kids.  They’ve come all the way out to Ohio to help with this inferno.  Not being a big time DC reader, and I’m sure many can correct me, as much as I kinda like some of these characters individually, this is a pretty damn dark time for the JLA.  Just sayin’.  Some green-haired lady said they’d chase after the “monster man” responsible for this fire…  If he hadn’t lost them by going into the woods.  Yoinks.

The JLB. Because they are so b-squad, they don’t deserve the A.

Okay, back to the story…  They try to figure out their next move as the paramedics come to the aid of the injured people.  Ice laments that it’s a shame this catastrophe has occurred because she really wanted to watch the Cat Grant Show because Superman was going to be on it!  I mean, I get it…  I get upset when I miss out on a thrilling “Is It a He or a She” episode of Maury because of my job too, but because I’m in customer service I can kinda call in sick if it’s that big of a deal – you can’t, Ice.  So Booster wants to catch this monster guy so they can take it around to talk shows and make money off it.  Yes sir…  The Justice League, everybody.

…And some better boots, cowboy.

Blue Beetle spots a path of destruction that must mean they are closing in on their monster.  Maxima psychically locates Doomsday, and by tapping into his mind discovers she’s nothing more than hate, death, and blood lust personified.  Soon, Doomsday spots the flying Beetle jet and hurls a log at it, causing it to crash.  While the team regroups from their fall, Doomsday decides to mess up some more things by punching a semi to death with a single blow.  The JLA sees the explosion that Doomsday causes on the other side of the treeline.  Before they can fully regroup and come up with a battle plan, Guy Gardner goes off and tries to show off his manhood, finds Doomsday and gets his face smashed into the concrete like a chump (as seen below in yet another amazingly awesome and hilarious frames in this story).  The rest of the league comes to Guy’s aid, but none of them are able to turn back the monster.  Bloodwynd, a new and particularly mysterious team member, is blasted and tossed into an oil plant.  When Blue Beetle finds him, he learns Bloodwynd’s secret (spoiler, it’s Martian Manhunter), but before he can do anything more, Blue Beetle gets his ass handed to him by Doomsday by way of a throat grab and some face first tossing into solid things.  Ice fears that Blue Beetle may have died from his injuries. 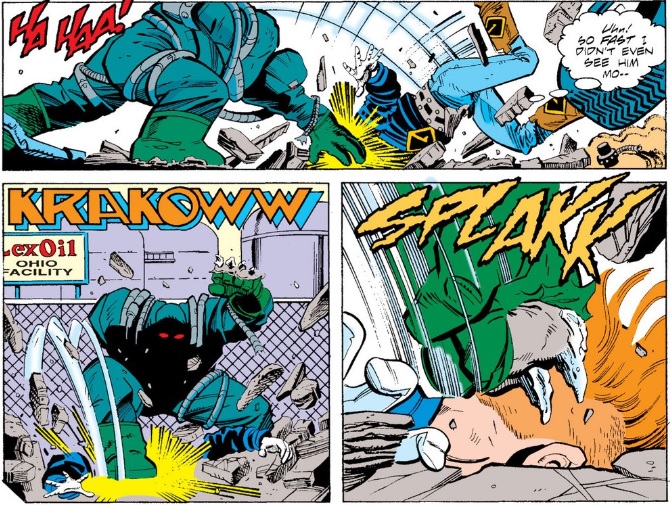 Ted Kord nearly dead from his face being tossed into things? Not funny. This? This is hilarious.

Meanwhile, all this is intercut with Superman being interviewed on the Cat Grant Show.  We will talk in much more detail about these moments below as it is a major part of this story and why it exists.  It’s after this interview that he learns of the Justice League’s battle with Doomsday.  He rushes off to Ohio to help his teammates.  Back in Ohio, Booster Gold is out to avenge his buddy, Blue Beetle.  Despite everything he throws at the beast, Doomsday still keeps coming.  The monstrosity punches Booster (who just barely got his force field up in time) so hard he flies for miles, where he’s caught by Superman and a very clever way to do that whole “Doomsday Is Coming”/”Doomsday Is Here” thing. 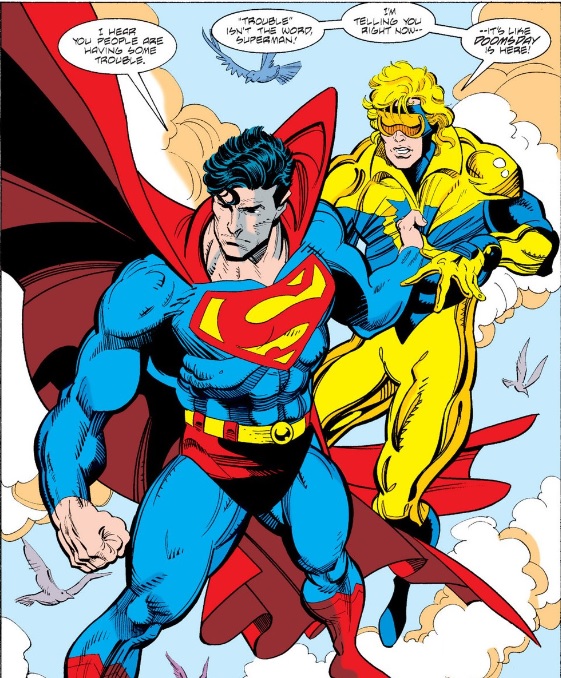 Ah, I see what you did there…

And so ends part two.  Superman is now in the presence of Doomsday.  The Justice League, for all their *snicker* might, can’t stop the beast.  This looks like a job for Superman…

Loved his covered up look. I wish we never actually saw what he looked like under the suit.

Remember I mentioned how this entire issue cuts back and forth from the Justice League fighting Doomsday to Superman’s interview?  That provides the true grit of this story.  DC literally uses Superman to tell the reader why he’s gotta die by the end of this story.  He’s looked at as nearly unapproachable.  Cat Grant assumes he’s the leader because he’s SO powerful and intelligent that there’s no way he follows someone else’s orders.  There’s no possible way people don’t listen to him when he’s barking out orders.  He tries to pass off the idea that the Justice League votes on all issues and topics.  That no one person is bigger than the idea of the team.  That makes him seem like a human and a team player.  He isn’t setting himself above anyone.  On the other hand, he’s caught in a Catch-22 when someone comments on his teammate Fire’s looks.  He only mentions that she’s a great person and a wonderful teammate, blah blah blah.  This makes him look inhuman because how can he not like a woman who, when on fire, flies around naked?

Worse, you see how far out of touch he is with a certain group of the population – the high school aged kids.  He answers questions from smaller kids.  He helps that one kid out in the last issue, but they are pre-teens.  They haven’t yet been jaded by an attack of hormones and naughty thoughts.  When we see that the interview has been arranged to be shown in high schools all over the Metropolis area, a couple high school kids whisper about how boring it is to watch and how much they wish they had talked to Guy Gardner instead.

Guy fucking Gardner?!?  Yeah.  You know why?  Guy is set up to be this kick-ass-first-ask-questions-later kind of guy who has long hair on top, buzz cut on the sides and back like the kids I went to high school with had.  He’s also a smug prick like the kids I went to high school with.  He was pretty much the personification of what had happened to comics in the late 80s and early 90s.  He was the hero for a new generation.  Superman was passe and a bore to kids who were dealing with all the raging emotions of teenage angst, hyper-love, and horny hormonal shifts.  Superman was the nerd who always did things the right way, but Guy Gardner was the badass who did things his way no matter who said what was right.  He got results, dammit.  He also got his face punched by both Batman and Superman, so shut your damn mouths, kids.  For anyone who collected comics before the dark times came (post Dark Knight Returns we’ll say), Guy Gardner was a prick fucker who sucked the joy out of life.

However, there was a problem.  Guy had (arguably) better stories because he did have ambiguous morality most of the time.  Superman was running stale.  How do you tell fresh stories about an omnipotent and all-powerful alien overlord who just so happens to be the best of the best of guys?  The answer is not very easily at all.  Like AT ALL.  You don’t cancel Superman comics and be done with him forever.  That wouldn’t do either.  But telling his stories aren’t easy.  How do you make him relevant?  How do you show the world you NEED him even though we live in a much different world than the one he was created?

Answer: You kill him.

But you don’t just kill him off.  You first show that he’s the baddest man in the whole damn town – badder than ol’ King Kong, and meaner than the junkyard dog (both the wrestler and the actual pitbull in the actual junkyard).  You tug on Superman’s cape, he’s going to punch you until you fall down.  And if you are as powerful as he is, threaten everything he loves by simply existing, and show up in his home city…  Well, he’ll put you down for good.

Then, there’s Doomsday.  Superman is the embodiment of ideals and pure goodness.  Doomsday is blood lust and hatred.  Superman is intelligent and is able to speak seriously about the worth of his teammates and how honored he is to be among them.  Doomsday laughs at the things he kills.  And piledrives faces into hard things.  Which is pretty much his go-to move.  And it’s awesome.

Again, Doomsday is a MacGuffin.  He’s nothing more than blind rage and mindless killing.  He only has to be there as the most powerful thing ever to get to the final part of the story, where he and Superman punch their way through Metropolis, and splash pages, to get to the final blow.  If Superman is something like a deus ex machina, then Doomsday truly is the exact plot device in need for a godlike being to stop.

We’re at the end of part two of my look at The Death of Superman.  We’ll get to part three on Monday and the first meeting of Superman and Doomsday in the pages of Superman #74!